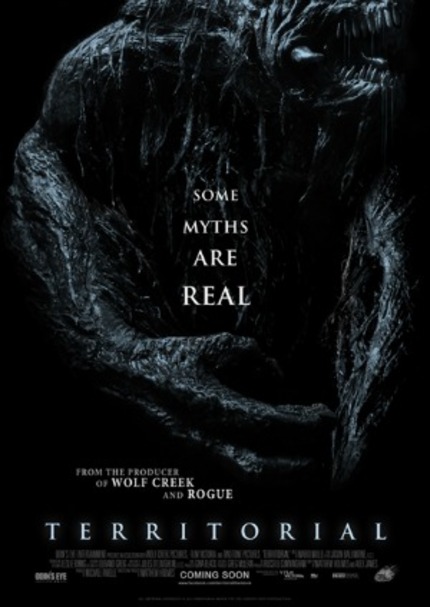 Hell yes, this is exactly what the world needs. A Predator-style movie, set in the harsh Australian colonial landscape - with tough criminals being hunted by a mythological being that has its roots in the oldest Aboriginal stories. And who better to bring it to us than Greg Mclean, the guy behind Wolf Creek, Rogue and the upcoming bigger, badder, scarier Wolf Creek 2.
In an arrangement similar to his executive producer role on Red Hill and Crawlspace, Mclean has teamed up with writer/director Matthew Holmes and Michael Favelle at Odin's Eye Productions to bring us Territorial - the sure-to-be-terrifying feature debut from Holmes.
While there were some early reports of this collaboration, ScreenAnarchy can confirm the project is running full steam ahead, with pre-sales on the creature feature set to begin in the 2013 Cannes market through Odin's Eye. We also have the very first look at the teaser art from the film, which hints at the darkness in store for horror audiences. Here's the short synopsis:

Pursued by a dark and ancient force of nature, a group of escaped outlaws must join forces with those who hunt them to fight their way out of a forbidden and feared valley deep in a mountain wilderness.

With Red Hill's Patrick Hughes tapped by Sly Stallone to direct Expendable 3, and Crawlspace's Justin Dix developing his next feature with Fox, suffice to say we'll be watching Holmes and the trajectory of Territorial with a very keen eye. Holmes has already started posting pre-production videos, with the latest Storyboards video worth checking out.
You can also check out the Facebook page for the monster-sized look at the poster art.
Sign-In to Vote
Tweet 0 Submit

"Hell yes, this is exactly what the world needs. A Predator-style movie, set in the harsh Australian colonial landscape - with tough criminals being hunted by a mythological being that has its roots in the oldest Aboriginal stories."

I want the trailer Mr de Bruyn, NOW DAMN IT!
hahahhahahhah...kidding, sounds entertaining though, thanks.