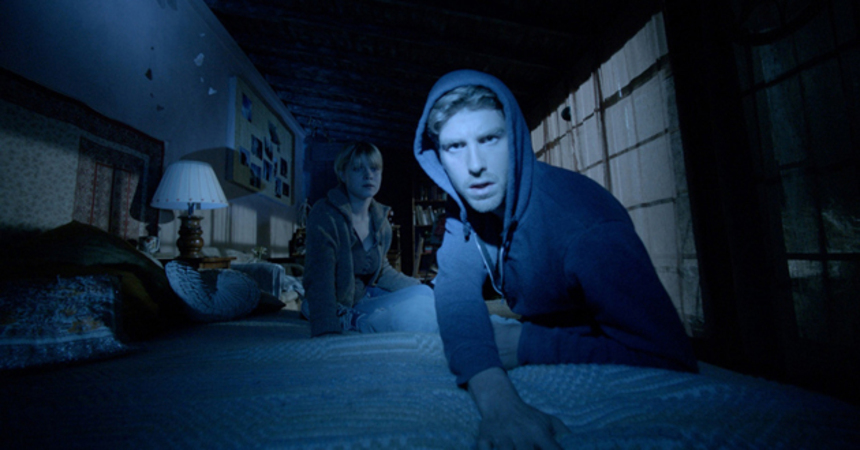 "Scott is a filmmaker in need of inspiration..." in a film whose very genre is in need of inspiration: found footage horror. The TFF festival guide bills Mr. Jones' writer/director, Karl Mueller, as someone who has "taken the found footage fright film to a new dimension, introducing a completely unique labyrinth of terrors." It's a bold statement, but one I took with a grain of salt. So many horror films have made similar claims, and those films have been liars. When you're sprinting through a herd of cattle, it's hard not to step in the bullshit.

And speaking of shit, at first it seemed like we could be in for some of the "same old" variety. The trick to any found footage film is coming up with a legitimate logistical reason why the characters are filming in the first place. The next trick is to make the audience forget that they are watching a film where the characters are conveniently filming every pertinent storytelling second of the fucking day. No small task, this, and one Mr. Jones isn't 100% successful at accomplishing. Fortunately, the film takes a small detour into actual documentary style filmmaking (to great effect) to establish Mr. Jones' backstory, and by the time it veers back into the found footage format, things have gotten interesting enough where you don't care why the characters don't drop the cameras and run for their lives.

So here are your logistics: Penny has uprooted her life for her boyfriend Scott, who feels moving to a house in the middle of nowhere will give him a kick in the creative balls. He is supposed to be filming a nature documentary, but the most interesting thing his camera records is the couple's deteriorating relationship. Until, that is, their camera captures footage of the elusive Mr. Jones (and no, we're not talking about the guy from the Counting Crows song here). Their discovery reignites their creative and romantic spark, as the couple collaborates on a multimedia documentary project about the titular character.

The mythology behind Mr. Jones is fantastic. Is he an artist? A shaman? A dream warrior? Is he friend or foe? And what's the deal with the creepy sculptures he makes and sends to random people? How does someone like that become a cause celeb in the art world without ever meeting another person? This is how the film hooks you. And yes, these questions do get answered, but not in some pat, unsatisfying manner. In fact, you'll probably forget you even asked them in all the what the fuck?-ness of the final act. Because things get weird, and that weirdness elevates Mr. Jones above the redundancy of its contemporaries. This is the new dimension the synopsis was talking about, and it allows the filmmaker to unfetter himself from the conventions of the format just as they are starting to overstay their welcome.

The abstractness of this approach might not appeal to everyone. There are a lot of ideas getting thrown against the wall, here, and not all of them stick. I wavered back and forth a few times about how much I actually liked the film. But in the end, I admire the risks Mueller takes, because they make for a more interesting viewing experience.
Is Mr. Jones a "completely unique labyrinth of terrors" as the synopsis claims? Well, there is a literal labyrinth, and the film's dream logic is a refreshing change, allowing Mueller to step outside the found footage gimmick in the third act. Things get a little Lynchian in narrative, if not aesthetic, playing with questions of identity and reality. So while the story starts out as derivative, it does incorporate enough outside elements into the genre to back up it's synoptic chest-thumping. You might find you need to salt those boasts to taste, but not as much as you'd think.

Do you feel this content is inappropriate or infringes upon your rights? Click here to report it, or see our DMCA policy.
Found FootageHorrorKarl MuellerMr. JonesTribeca 2013