Tribeca 2013 Review: STAND CLEAR OF THE CLOSING DOORS Proves A Unique And Lyrical Journey On The Autistic Spectrum 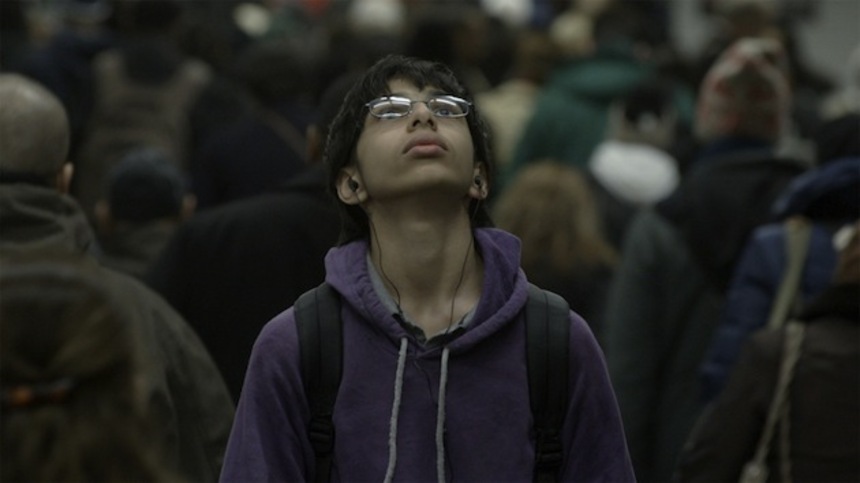 Stand Clear Of The Closing Doors is one of those rare tone poems that successfully straddles the line between an abstract avalanche of emotions and images and true narrative, complete with arcs, climax, and resolution. It's the story of a young autistic boy who struggles to fit in, both at school and inside of his own family. The added element of Hurricane Sandy lends a ticking clock realism to the proceedings that might otherwise had become mired in tedium. As is, Sam Fleischner's feature about a child who loses himself in the labyrinth of the New York City subway system is an engaging and moving drama that utilizes some rather unorthodox techniques to achieve its emotional goals.

First and foremost, the film is about disconnection and alienation. This is just about the most obvious thing anyone could write about a film with an autistic protagonist, but Ricky, played by Jesus Valez (who himself is on the autism spectrum), serves not as an antihero who the audience couldn't possibly relate to, but as the embodiment of all the anxiety and detachment that comes from living in a major, modern metropolis. As the film progresses, our sympathies shift from Ricky's stressed sister and mother to Ricky himself, as he disappears into the subway system after a series of patience-testing incidents. We find ourselves able to look through Ricky's eyes, aided by Fleischner's immersion technique: most of the individuals captured aboard the subway in this film were unaware they were being filmed, and then later given release forms to be signed. The style of photography--a series of handheld, often close-up shots that create a sense of claustrophobia and more than a little franticness--helps set the tone for the majority of Ricky's subterranean stay.

As Ricky's mother (Andrea Suarez) continues to search for her son, her relationship with her daughter, whom she blames for his disappearance, begins to splinter, as does her relationship with her husband, who is absent for most of the film. Her search yields pitiful results, not only in terms of clues that might lead to her son's whereabouts, but in terms of people who might care at all that an autistic boy from Far Rockaway is missing. The story jumps between the trials and tribulations of Ricky and Ricky's mother, finally coming to a head as Hurricane Sandy bears down on the city.

Without getting into spoiler territory, I will say that this is a point in the film that some may find jarring, and that I myself was confused by until other audience members asked the director to address it in a Q&A session following the screening. The film devolves into magical realism near the end of the story, and those who were around the New York City area may find themselves rather confused by the chronology. Still, it's a small price to pay for a unique, lyrical, and tight picture of this caliber.

Do you feel this content is inappropriate or infringes upon your rights? Click here to report it, or see our DMCA policy.
autism spectrumhurricane sandysam fleischnerstand clear of the closing doorsTribeca 2013