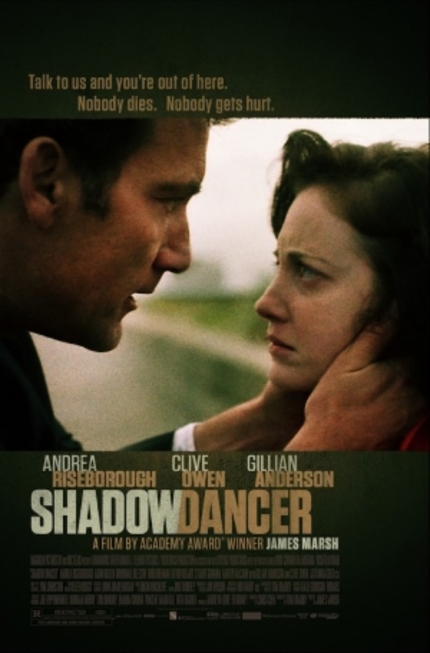 Shifting loyalties regarding family, cause and country are the basis for Shadow Dancer, a sensitive and affecting new political thriller from director James Marsh (Man on Wire, Red Riding: 1980). It boasts a great ensemble cast that includes Clive Owen, Gillian Anderson, Domhnall Gleeson and a relative newcomer, Andrea Riseborough in the central role.
Soon after witnessing a senseless family tragedy in 1973 in the Occupied Northern Ireland, we are transported to 1998 London, where a sullen Republican member, Collette (Riseborough) reluctantly disposes a bomb in the tube station stairways. Then, she is swiftly scooped up by two ready MI5 agents and delivered to an interrogation room. The whole wordless botched bombing attempt and following apprehension sequences are tense and swift. There, Collette is given an ultimatum by an MI5 officer Mac (Clive Owen): become an informant in her own community and her family or lose everything and go to jail for 25 years. Fearing her young son's fate with the prospect of her being locked up, and after Mac's pledge to become a protector of her and her son from any harm, she accepts being a mole in her radical IRA household.

Back home, with the news of The Good Friday Agreement between the elite Republicans and the British Government looming, Collette's brothers, who belong to a more radical faction of the IRA and are frustrated by nimble politicians, plan an assassination of a high level judge. Collette, being under suspicion from the Republican higher-ups and radicals alike after her supposed unscathed escape from British authorities, is once again pushed into taking part in the terror act. Her absolute last minute phone call to Mac results in the death of her brother's colleague and the failure of their plan. The pressure and suspicions mount. Not wanting to harm anyone by her spying activity, Collette wants out, but Mac's boss Fletcher (Gillian Anderson) won't have any of it. Furthermore, she is willing to give Collette to the dogs when push comes to shove. "There are other informants," she coldly declares to concerned Mac.

Even though it's a classic 'pawn in their game' film, with its deliberate pacing and mood, Shadow Dancer never stays too far from its characters. Handsomely shot in grainy, anamorphic widescreen by Rob Hardy (Boy A, Red Riding: 1974, The Forgiveness of Blood, Inni), the camera often lingers on Collette and Mac's anxiety-ridden faces in close-ups. Working from his own novel of the same name, Tom Bradby's script beautifully sketches out sympathetic characters and their dilemmas without ever being sentimental, all the while pointing out the ugly circumstances brought on by years of systematic humiliation.

Not only is Riseborough fantastic as our morally tangled heroine, always dependable Owen also gives a fine tuned performance as an MI5 officer trying to do right by his subject. Domhnall Gleeson (Harry Potter series) turns gritty as Collette's militant younger brother. Most surprising is Gillian Anderson in a small but meaty role. Her double dealing MI5 commanding officer, Kate Fletcher, is an imposing presence in every frame she's in. Ever since re-relocating to London, Anderson is having a sort of renaissance of her career all across the pond - after her critically acclaimed performances in BBC's Bleak House and Great Expectations, she currently stars in an Irish TV series The Fall and NBC's Hannibal. Anderson's beauty is well utilized by Marsh here as a source of intimidation.

I see this film as a perfect antidote for often faceless, visceral filmmaking that has become the standard for today's action thrillers, which I call the 'Paul Greengrass school of filmmaking.' Shadow Dancer is understated, classy, solid filmmaking with intelligence and soul.
Shadow Dancer opens in select theaters n New York and Los Angeles on Friday, May 31, before expanding in the coming weeks. Visit the official site for theater listings and more information.


Dustin Chang is a freelance writer. His musings and opinions on the world can be found at www.dustinchang.com
Tweet Post Submit

Do you feel this content is inappropriate or infringes upon your rights? Click here to report it, or see our DMCA policy.
Andrea Riseboroughclive owenJames Marsh