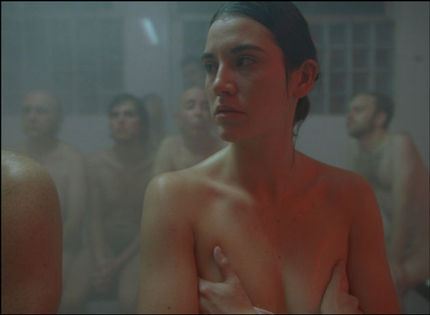 As I review more and more films out of festivals, I'm beginning to notice a pattern: I'm much more forgiving and enthusiastic about films that shoot for the moon and fall somewhere short than with serviceable movies trodding well-worn territory that leave little to criticize. Which brings me to Carlos Reygadas' Post Tenebras Lux, a film which is audacious, frustrating, beautiful, shocking, emotional, impossible, perhaps brilliant, or, just as likely, a misfire.

At times it's exhilarating, at other times it felt like trying to put together a puzzle that not only has pieces missing, but also has some pieces from other puzzles mixed in. But enough overwrought description -- my point is that Post Tenebras Lux is not at all conducive to the type of review which simply explains to people whether or not they should see a movie and why. I have no idea whether or not you should see Post Tenebras Lux. You might hate it, like many critics at Cannes allegedly did.

But love or hate it, it's certainly is not a chore to watch. In fact, for the most part, I was consistently immersed and stimulated by Reygadas' dark, bizarre, time-jumping fable. I won't claim to have fully understood the film, but I certainly reacted to it.

It begins in a little girl's dream. She's running around a muddy field full of farm animals at magic hour as the sky gets darker and more ominous, finally giving way to a thunder storm. Then, in reality (maybe), the devil shows up. Not some metaphorical devil, but a pointy-tailed, horned, red thing with a goat's head carrying a tool box (naturally.). He walks into a upper-middle class family's house in the middle of the night, and, after waking up the young boy, walks into the parents' room and closes the door.

We stay with this family for the rest of the movie, but not in any traditional or linear way. The movie jumps back and forth in time, in and out of reality and all over the place in terms of point of view -- it makes The Tree of Life look like a children's cartoon. It is not meant for the type of people that finish a movie and demand to know what it means. 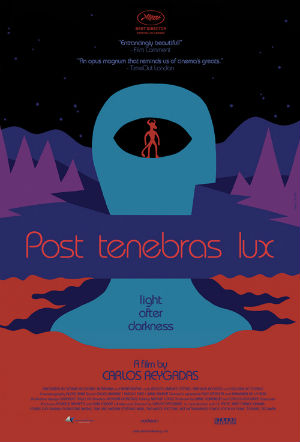 But to paraphrase a quote from the sculpture garden scene in John Cassavetes' Shadows, it doesn't really matter what art means -- "If you feel it, you feel it." And, for the most part, I found Post Tenebras Lux moving and compelling. From the first scene (and from his previous work like Silent Light and Japon), it's clear that Reygadas is too talented a director to simply dismiss as a pretentious hack.

And while trying to add up the film may give you a headache -- and by the end it becomes clear this is by design -- its scenes are all fascinating, and often stunning. It's a film where a man is playing happily with his children one moment, and then five minutes later, beating up his dog in a blind rage, one which follows its central couple from a family gathering in Mexico to, almost immediately, a libertine sex spa in France. It's also a movie which contains moments of extreme tenderness and innocence, including an awkward rendition of a Neil Young song which almost brought me to tears.

It is, perhaps, not as cohesive as his previous films, but I didn't find it any less worthwhile. In fact, I think that anyone with a serious interest in cinema owes it to themselves to at least experience Post Tenebras Lux, regardless of whether they like it in the end. I suppose this contradicts the tone I took at the beginning, but as I've been working my way through this review, going over the film again in my head, I'm actually thinking about how much I'd like to see it again.

Review originally published during the Black Movie festival in January 2013. Post Tenebras Lux opens at Film Forum in New York today (May 1) and at The Cinefamily and other theaters in Los Angeles on June 7.

Do you feel this content is inappropriate or infringes upon your rights? Click here to report it, or see our DMCA policy.
Carlos ReygadasRut ReygadasMitsy FerrandJoakim ChardonnensAnder VérezDrama