The most anticipated film of the Jeonju International Film Festival's Korean Competition this year, Kang Ji-na's feature Dear Dolphin, was also the most polished. With its themes of love, loss and loneliness, as well as its vibrant colors, strong mise-en-scene and well-judged flights of fancy, its appeal is universal.

Hyeok-geun's life is thrown into turmoil when his young wife Cha-kyeong dies after being hit by a car. A year later her friend, who is also still devastated by her loss, not to mention guilt-ridden for having lent her the bike that the accident, visits him, asking him to accompany her on a trip to her burial site. As they both seeks to come to terms with the holes in their lives, they become close to one another. However, Kyeok-geun becomes troubled when his late lover begins to appear before him in his waking life.

Unable to get over the loss of his dear departed, Hyeok-geun imagines his bubbly young wife has returned to him. His fragile state has prompted him to delude himself, or has it? The deceased Cha-kyeong also appears in her own scenes, which exist outside of the man's imagination. During these segments she interacts with a middle-aged man in her very own purgatory, seeking counsel about her continued interactions with her husband, even after having shuffled off her mortal coil. Can she not let him go or is she scared to leave him alone?

With her short-cropped hair and lively personality, Han Ye-ri, as Cha-keyong, is reminiscent of Carey Mulligan. Following her death, she appears in the same blue dress throughout the rest of the film. This visual clue reminds us of her passing but the blue color of her garment is also important. It has a calming effect on her husband and also matches the bodies of water she frequently finds herself beside, be they fish tanks, aquariums or pools. She is of course the dolphin of the title.

The water motif appears early on, as the married couple move into their apartment. The fishtank, which serves as the centerpiece of their living room, is ever present, and as the articles around it move, change or disappear completely, it remains. It's a life giving force unaffected by the events befalling the film's characters. As a dolphin, Cha-kyeong floats through a larger body of water, symbolically present in the film as a gateway between the here and hereafter.

As those forced to remain behind in a less colorful world following Cha-kyeong's death, Lee Hee-joon and Lee Yeong-jin deliver sober performances, quietly in tune with the film's mournful air. Natural and easy to empathize with, they help to counter balance some of the script's emotional inconsistencies. Yet their good work can only get the film so far.

There's no denying Kang's natural ability as both a storyteller and a stylist. But for all of Dear Dolphin's merits, and there are many, it is slightly undermined by a pervading sense of familiarity. The film's well-rendered elements have all appeared elsewhere before and there's a certain lack of conviction in its conclusion. Kang has the makings of a great director but it may take another feature until she can harness her enormous talent behind a more gripping story. Until then, Dear Dolphin is an impressive example of filmmaking with just the faintest twang of a hollow core. 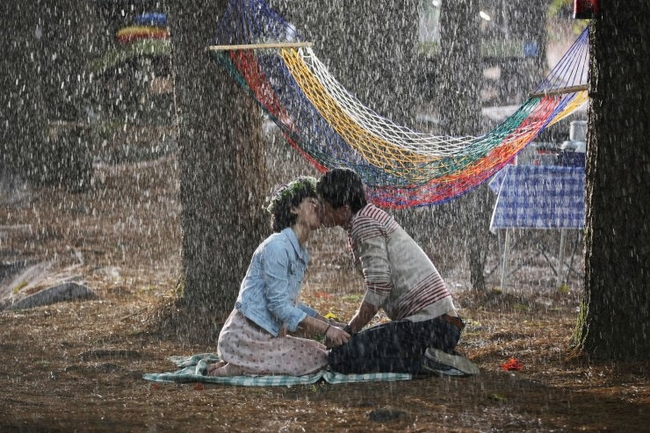