Italian Films Have Never Been So Good: A Recap Of The Season's Best 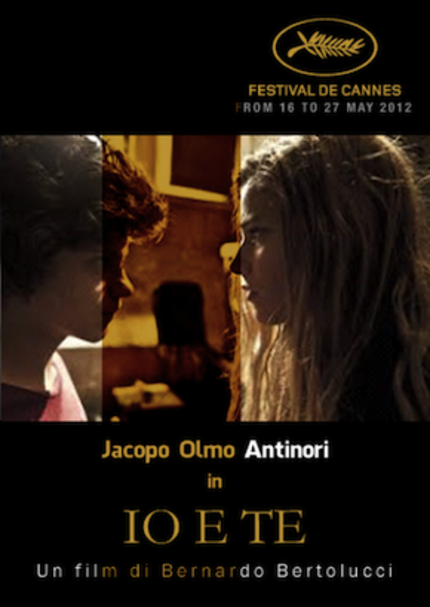 Ok, I've never been a fan of the actual Italian cinema, with its compulsive sclerosis of family dramas or broken couples. But while we're heading towards the end of the season, with summer at the doors and cinephiles ready for their beach-momentum transfer, the feeling I have is a very positive one. Yep, it was a great season for Italian cinema. It's been years since we've seen so much good stuff from the country of Fellini and Rossellini.
The main title, of course, goes to Bernardo Bertolucci's Me & You. The Italian Maestro is back with a very intimate coming of age tale, as if the young Antoine Doinel of Le 400 Coups ended up in a parallel dimension and instead of going to reformatory succeeded in mirroring himself in another's eyes, blood of the same blood, meat of the same meat. Here, the attraction becomes melancholy sweetness, an embrace of those you would want to last forever but that already tastes of goodbye, of roads destined to separate toward other worlds and visions.
And yet another Academy Award director is back; Giuseppe Tornatore along with international actors Geoffrey Rush and Jim Sturgess, who star in The Best Offer - a thriller about an art auctioneer obsessed with a young and mysterious lady. Indeed, we have a morbid love story that is both sad and romantic, a story of loneliness and difficult catharsis. Reminding us of early Polanski, The Best Offer is the film with which Tornatore explains once again how his cinema works and why it does exist. Those who used to love him will love him even more now.
Another season's best is Daniele Vicari's reenactment of the final tragic days of the 2001 G8 summit in Italy, Diaz: Don't Clean Up This Blood. Apparently a semi mockumentary, the film is instead a pure genre movie loaded of violent and vicious scenes. Vicari's work had its world premiere during the last Berlinale, winning the 2nd place of the Panorama Audience Award. More than Dario Argento's Dracula reproposal, Diaz is the real exploitation of the season, a film full of fear, constantly hitting the audience with the brutal happenings of those days, defined by Amnesty International as «The most serious suspension of the democratic rights in a western country after the second world war».
Me and You, The Best Offer and Diaz all had their nominations at the David di Donatello Awards, the Italian Oscars. In addition to them, other titles have brought light to the Italian season. We can think of Matteo Garrone's Reality, a complex and surreal film about a man turning mad because of his dangerous obsession with the tv programme Big Brother. Then of course we have two movies featured at the last Cannes Film Fest, Valeria Golino's Miele and Paolo Sorrentino's The Great Beauty. Also veteran Marco Bellocchio is in the house with Dormant Beauty (starring Isabelle Huppert), while Gabriele Salvatores is once again black noir in Siberian Education.

For the younger audience, let's spread some praise for As White As Milk, As Red As Blood, a teenage romance directed by Giacomo Campiotti and starring the best young star that Italy has to offer, Filippo Scicchitano. Recalling Japanese pure love films such as Yukisada's Crying Out Love In The Center Of The World, Campiotti knows when to extinguish the words to leave the images dancing in a bittersweet melody, reminding us the dreams and pain of that very first moment when our heart stopped beating.
As far as I can remember, it's been years since Italian cinema was so full of beautiful works. Let's hope that the coming Venice Film Festival will confirm this positive trend. And if you don't have a crush on Italian cinema, maybe it's time you give it another chance, keeping your eyes wide open.
Tweet Post Submit

Do you feel this content is inappropriate or infringes upon your rights? Click here to report it, or see our DMCA policy.
bertoluccidiazme and youthe best offertornatorevicari