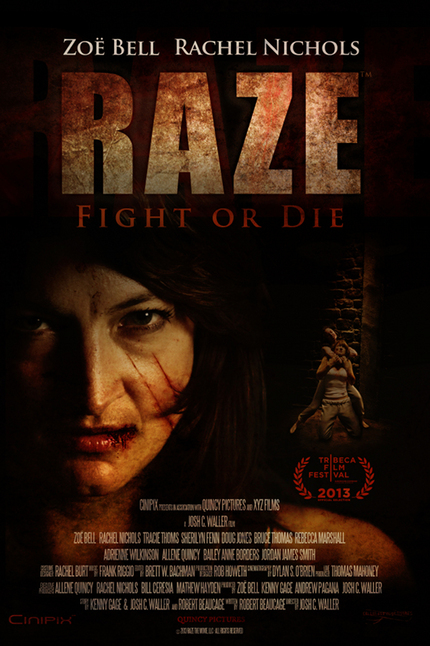 Awakening after being abducted, JAMIE (Nichols) finds herself in a concrete bunker, and she discovers that she is not alone. She and SABRINA (Bell), a fellow abductee, both soon realize that they are in a modern day "coliseum" where, along with 48 other women, they are condemned to kill each other in order to protect their very own loved ones.

"We wanted to show the [audience] an experience and emotional ride that they aren't expecting," says Bell.  "I hope what people get out of it is not just the physical horror of snapping someone's neck or gouging someone's eyes out or whatever, but the emotional horror of having to kill someone to save someone your love. That's my hope."

Raze will have its world premiere at the TriBeCa Film Festival April 21, in New York. Additional public screenings will be shown throughout the festival. For details on scheduling check out www.razethemovie.com for the latest news and updates about the film. Also be sure to follow RazeTheMovie on Facebook www.facebook.com/razethemovie  and Twitter www.twitter.com/razethemovie

[Full disclosure: XYZ Films - where I am a partner - are involved as executive producers on the film. Take that as you will.]