Watch The US Trailer For Stephen Fung's TAI CHI HERO 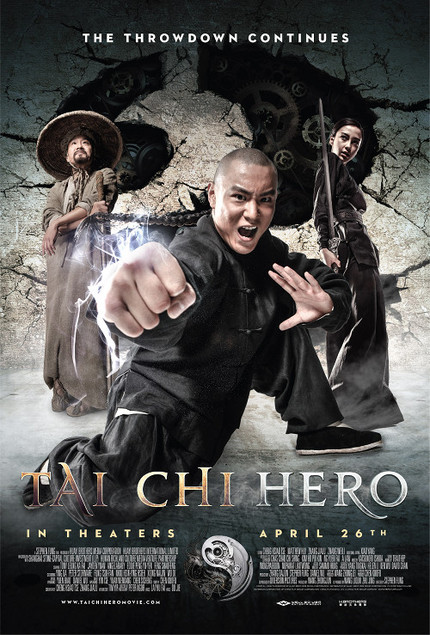 Stephen Fung's Tai Chi Hero is coming to US shores, the riotous conclusion of the two part martial arts / steampunk fusion hitting American screens April 26th thanks to WellGo USA. And - no surprise here - that means a brand new trailer for your viewing pleasure.

Lu Chan (Jayden Yuan) is still trying to find his place in Chen Village, the legendary town where everyone is a martial arts master...and Chen-style Tai Chi is forbidden to outsiders. But since he helped save the town from a frightening steam-powered machine, Yuniang (Angelababy), beautiful daughter of Grandmaster Chen (Tony Leung Ka-Fai), agrees to marry Lu Chan and bring him into the family.  It's only a formality, though - she is the teacher, and he is the student - and that suits Lu Chan just fine, as the mutant horn on his head gives him incredible kung-fu power, but leaves him dumber each time, and closer to death.

Chen Village still stands in the shadow of danger. A prodigal brother returns, Lu Chan's presence invokes a curse on the town, and Yuniang's scorned fiancée has an appetite for revenge, as well as some new partners in crime.

The second in a trilogy from the creators of IP MAN and DETECTIVE DEE, and featuring action directed by the legendary Sammo Hung, TAI CHI HERO is a full-on, steampunk-infused, video game-influenced kung fu throwdown that will knock you out of your seat.

I enjoyed the hell out of these films and they way they balance out a respect for the history of martial arts flicks while also having a bit of fun with the form and moving ahead to the future. Plus this one had the good sense to cast Peter Stormare as a villainous officer of the Dutch East India Company! Fear his scowl!