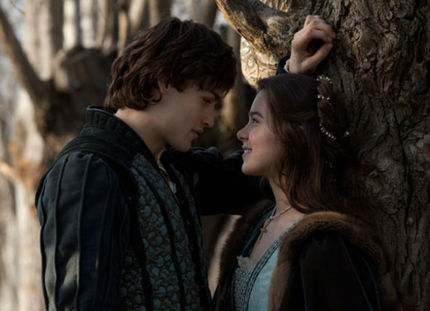 It's not revisionist and it's not flashy -- in other words, it's not Baz Luhrmann's modernistic vision. But it does feature 16-year-old Hailee Steinfeld and a script by Downton Abbey creator Julian Fellows.

The new version of Romeo and Juliet stars Steinfeld (True Grit) and Douglas Booth (Darren Aronofsky's upcoming Noah) as the teenage lovers, with a supporting cast led by Damian Lewis and Paul Giamatti. Stellan Skarsgård intones the openings words in the trailer, which lays out the tragic romance for those who may not have been paying attention in school.

Carlo Carlei directed. The traditional approach as worked well on period television shows, but the real appeal here is the cast. Can Steinfeld, who was so good in True Grit, not only pull off the accent but deliver a heartbreaking performance? Can Booth prove both swoon-worthy and electrifying? Lewis, Giamatti, and Skarsgård are proven commodities with proven material, so they should provide a minimum basis of quality in the film.

Romeo and Juliet opens in UK cinemas on July 26.

Do you feel this content is inappropriate or infringes upon your rights? Click here to report it, or see our DMCA policy.
Damian LewisDouglas BoothHailee SteinfeldJulian FellowsPaul Giamatti