Udine 2013 Review: THE WAY WE DANCE Finds The Right Beat 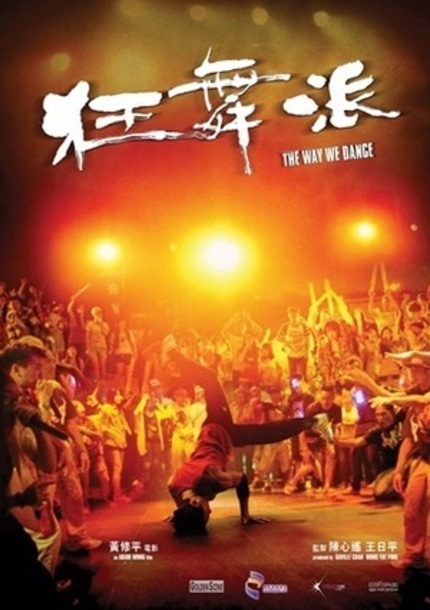 The latest offering from local indie director Adam Wong strives to be Hong Kong's answer to the Step Up dance flicks, and largely transcends its budgetary limitations to deliver a toe-tapping, unashamedly feel-good romp.

High-school graduate Fleur (Cherry Ngan) lives for dance. Every moment she's awake she is plugged into her music, planning out new hip-hop moves in her head. Unfortunately, she is trapped...working at the family restaurant scooping tofu all day long. She's even picked up the nickname "Tofu Fa" after the sweet dessert she dishes out day-in day-out. But when her university application is accepted, her prayers are answered, and no sooner has she set foot on campus, she's successfully joined local hip-hop dance gang, BombA.

What should be a dream moment is quickly soured, however, when she catches the eye of group leader Dave (Lokman). This incurs the wrath of his girlfriend, and fellow BombA teammate Rebecca (Janice Fan), who chases Fleur off the team. Rejected and friendless, Fleur meets oddball tai chi student "Dickhead" Alan (Babyjohn), who takes an immediate shine to her. Before long, he is teaching her some basic moves and enlisting her in his own ragtag dance troupe of young offenders.

With the clock ticking down to an all-important dance competition, which will pitch them against Hong Kong's most notorious be-boppers, the Rooftoppers, Fleur must decide whose team she's on, whose love to reciprocate and as Rooftoppers' leader Stormy (Tommy Guns) asks: does she have the self-belief to get to the top?

First conceived of back in 2008, director Adam Wong and scriptwriter Chan Tai Lee spent three years auditioning hundreds of applicants for their street dance odyssey, which stages a series of elaborate be-bop sequences and dance battles all over Hong Kong, from the university lawns to the rooftops of Kowloon. Featuring a largely unknown and untested cast, this is hardly high drama, and the script is shaped to showcase the strengths of its performers. This was especially true after the discovery of renowned break dancer Tommy Guns, whose character was completely re-written to accommodate his unique talents and abilities.

With attention-grabbing tunes from Day Tai and choreography from Shing Mak, The Way We Dance is a breath of fresh air in a local industry all-too-reliant on lazily-assembled star vehicles and overly-similar crime and martial arts dramas. The performances vary and production values are hardly top shelf, but the energy levels are sustained throughout, and the choreography shows flashes of genuine inventiveness that will impress even those unfamiliar with the street dance scene.

Without a doubt, the film's biggest strength is the discovery of lead actress Cherry Ngan, in what is sure to prove a star-making turn. Her unconventional beauty and eccentric exuberance help create an infectiously likable lead character, whose "crab-like" dance moves prove a running highlight throughout the film. My suspicion is that by this time next year we'll have seen a whole lot more of Cherry Ngan, and I sincerely hope she capitalizes on the opportunity - as she clearly as the talent to do so.

While comparisons with Summit Entertainment's increasingly interesting Step Up franchise are unavoidable - and it must be conceded that The Way We Dance operates on a far more modest scale - Adam Wong's film can stand proud as a worthy addition to the dance film genre.

Funding, again courtesy of Golden Scene, is apparently already in place for a sequel, and with a slated August release date here in Hong Kong, they are clearly confident about the film's chances to resonate with local audiences. Regardless of its commercial success, the most important factor here is that Hong Kong has produced a smart, positive and enjoyable movie for and about young people. And that hasn't happened for years.

The Way We Dance

More about The Way We Dance