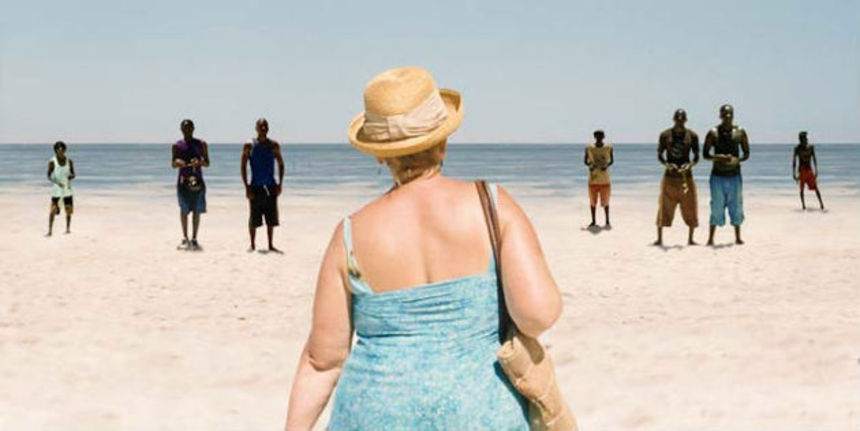 Ulrich Seidl's Paradise: Love, the first in his trilogy of "paradise" films (next up is Faith followed by Hope), is a confrontational, often ugly depiction of different forms of desperation and exploitation set against a sex tourism backdrop, and indeed, the audience seemed split between vehement disgust and fervent praise.

It's no surprise given the subject matter and the characteristically explicit, unflinching way with which Seidl handles the material. While my own opinion leans toward the fervent praise side of the debate, it's still a decidedly flawed film, to the point where I can't really fault the opposition either.

The titular paradise is the beachfront of Kenya, where middle-aged European women have taken to hiring African men known as "beach boys" who indulge their emotional and sexual fantasies for money. To Teresa, a flabby, lonely 50-year-old woman who looks like she stepped out of a Martin Parr photograph, this seems like a perfect getaway for her birthday. So she leaves her belligerent daughter with her sister and checks into a beach side resort, ready to embark on some sort of sexual and emotional revival.

This is a Seidl film, so naturally, she doesn't find what she's looking for. But the nature of the beach boys' business and Teresa's ignorance and desperation make for some fascinating shifts in power dynamics throughout the film as well as a thoughtful allegory for the notion of happiness in a consumer culture.

What we are subjected to is, on the surface, a constant cycle of exploitation between wealthy Europeans who try to use Africans for emotional and sexual fulfillment and the native Kenyans who prey on middle-age women's insecurities and loneliness for financial gain. As a metaphor for post-colonialism, the conceit is shallow at best, but Seidl wisely avoids dwelling on politics here and instead examines sadness, desperation and even the pathetic hopes rooted in the situation. 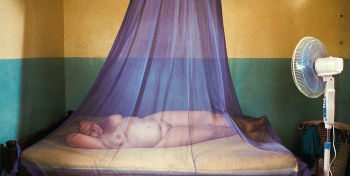 Many will be put off by the explicit, deliberately provocative tactics that Seidl uses to explore the subject. Yes, you will see overweight, middle-aged women in every state of undress and sexual humiliation a-plenty, including one scene that makes the hotel room sequence in John Cassavetes' Husbands seem like a celebration of human kindness in comparison.

While the film is certainly bleak, it's not cold or overly judgmental, and it's often very funny too. Seidel is a master of static, perfectly-composed shots that are visually hilarious in a deadpan way that only Roy Andersson (Songs from the Second Floor, You the Living) ever matches.

Also, while some have already disagreed strongly, I don't believe Seidl is without empathy for its characters or their situation. Make no mistake, Teresa behaves awfully, sometimes even reprehensibly, but her behavior is born more out of ignorance and desperation than conscious malicious intentions, while that of the Kenyans stems from a different type of need and, probably, years of oppression. Much credit should also be given to Margarethe Tiesel, whose performance as Teresa is dynamic, sensitive and complex, and its probably the only thing that kept some members of the audience from throwing things at the screen during some of the difficult scenes.

Teresa's attitude towards her sexual encounters and the locals takes the collective consciousness of a consumerist culture to its extreme -- that is, we have the idea repeatedly shoved down our throats that not only are we entitled to our desires, but that we can buy them. With love and deeper happiness in your life, the message is easy to ignore, but loneliness and depression breed desperation, and Seidl is sensitive to this fact.

Indeed, I believe that Teresa seems to know deep down than her vacation won't end her loneliness, and yet, she truly wants to believe otherwise. The result is a series of increasingly pathetic, and then cruel, sexual trysts that certainly test the audience's patience with an already tough-to-like character, but that also perfectly capture the way that unhappy Westerners often seek fulfillment. 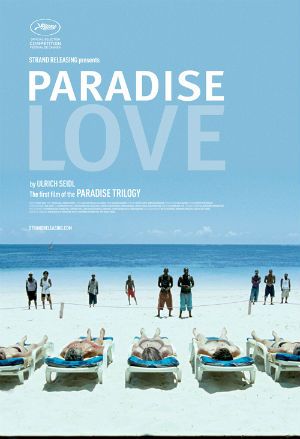 In the press notes, both Seidel and the crew go on at length about how difficult the film was to shoot, and moreover, how persistent the Kenyans are about being paid off for everything. These difficulties are probably responsible for the most problematic aspect of the film, which is the unwillingness to explore the lives of these beach boys beyond Teresa's point of view. They're never fully reduced to caricatures, thanks to incredibly strong performances from Seidl's group of first-time actors, but literally the only desire or motivation that any one of them ever displays in the film is to make money off of tourists.

My problem here isn't so much the politics of the decision, but the fact that because these characters are so dynamic and charismatic in their interactions with tourists, it would have been a much more interesting movie if we got some window into their personal lives.

So, as an end-all examination of class, race and neo-colonialism, Paradise: Love fails outright. But on a more intimate level, the film illuminates complex emotional truths about sadness, cruelty and the search for happiness. Personally, I found it funny, sad, absorbing, and even touching in an odd way, and it's always refreshing to see a film which people are so vocal about either way. But again, I wouldn't fault anyone for thinking the exact opposite.

Review originally published during the Cannes Film Festival in May 2012. Paradise: Love opens in limited release in the U.S. on April 26.