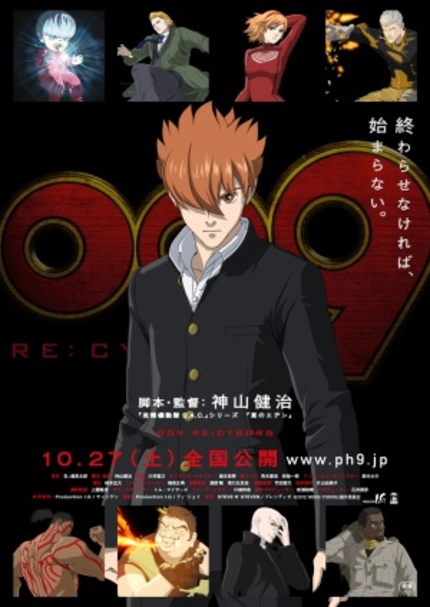 One of the great things about film festivals is that they allow people to see Japanese anime films in a cinema. Being able to do so is such a rarity in The Netherlands that I'm really grateful for festivals like Camera Japan (Rotterdam) and Imagine (Amsterdam) who make the effort to add several such titles to their catalogs.

This year, Imagine managed to secure 009 Re: Cyborg 3D, a modern reworking of a famous manga from the 1960s, in which a group of nine cyborgs formed a team to protect the Earth from wars and (other) disasters. It is a title that has been on our radar for some time, ever since Ghost in the Shell director Oshii Mamoru presented a mysterious CGI promo for it a few years back.

It turned out that anime studio Production I.G. was indeed making a new 009 Re: Cyborg film, written and directed by Kamiyama Kenji. The end result is a stunning-looking 3D anime which merges intricate drawings with CGI.

So yesterday at the festival I went into the venue excited. I am a big fan of Kamiyama, whose writing/directing credits include Ghost in the Shell: StandAlone Complex, Marebito: Guardian of the Spirit and the splendid Eden of the East. Afterwards, I left the venue shocked and confused.

Wait, what? I'll explain, but first:

It is 2013 and the world is at peace. But when suicide bombers blow up dozens of skyscrapers all over the world, without there being any clue as to who is behind this, national tensions start building up to a dangerous level.

In the past, there used to be a team of nine super cyborgs who guarded the peace on Earth. Unneeded in recent years, these cyborgs have scattered all over the world, some hiding in the population, some working for their governments.

When the team is re-assembled to deal with the terrorist threat, several members turn out to be targeted already by nefarious forces. And the team's designated leader, the cyborg known as 009, may have already been brainwashed by the enemy...

Let's start with the good news: the film looks stunning. When Oshii showed the original promo there was an uncanny mismatch between the old character designs and their modern settings, but the final film shows the same pleasing character designs as seen in StandAlone Complex and Morebito. The 3D is nothing short of awesome, both in its design and in its use. A slow-motion fight with water splashing around, a crowd in a busy street, a cyborg flying through the landscape; these visuals are much enhanced by the 3D. The action is riveting, the environments gorgeous. This is probably studio Production I.G.'s best work since Ghost in the Shell: Innocence.

On top of that, the film's score is by Kawai Kenji, who is in full Avalon mode here, at times throwing the might of entire choirs and orchestras at you.

Make no mistake: this film deserves to be seen on as big a screen as possible, preferably with the music loud and the 3D definitely turned on.

But when we get to the plot, it's harder to heap praise on the film. The story is not so much bad as it is way, WAY out there, like an entire season of The X-Files stitched together. Instead of just being over-the-top, this film throws itself over the moon!

Everything is fine in the first half, when the attacks happen and the team is re-assembled. Each of the nine cyborgs is given time to be introduced and to show off a bit. You do not hear their backstory, but it isn't really needed. You get that they were a team once, that they are super-powered and generally benign, even if some bear grudges. And the enemy seems to be an evil organization backed by Israel and the US, trying to fake a terrorist threat to keep a war-fueled economy running. That is actually quite daring stuff in this day and age.

But next a religious element is introduced, and the film spectacularly... I don't know how to describe it. Derails? Shoots itself in the foot? Things certainly get very Evangelion all of a sudden. That can be interesting in itself, but I wouldn't want to pull such a stunt while trying to reboot what can be seen as an old kiddie-series.

Thing is, the explanations given in the film require a lot of exposition and a lot of time to digest. 009 Re: Cyborg is, at 104 minutes, not exactly short, but you do not get any time to ruminate on the consequences of what you are told. In the end, the film demands a lot of faith from its viewers, while at the same time destroying faith as we know it. This is a film where any five minutes is fantastic, but as a whole it collapses.

It's a surprisingly messy affair from such a proven, talented writer as Kamiyama Kenji, who has shown in the past to be perfectly capable of juggling high concepts, supernatural affairs and large groups of believable characters. Maybe it was the length? Maybe this would have been brilliant as a series instead of a film?

Imagine if someone had made a reboot of Masters of the Universe, and it told the story of The Matrix with those characters. The mismatch is THAT great. The only film I can think of that compares to this is the original Star Trek: The Movie from 1979, which also tried to reboot an old franchise using gorgeous visuals and too pompous a story. Disney's 1980 bomb The Black Hole comes to mind as well, although 009 Re: Cyborg is more serious.

In fact, 009 Re: Cyborg is a surprisingly dour and somber film. It deals with Gods, mass-murders, sacrifices and how to cope with the demise of millions. At the same time, it uses a bunch of silly, stereotypical characters in silly costumes from decades ago to tell its story, and this greatly hampers any attempt at profoundness.

Stick around through the end credits, and look at the final shot as it fades out into one last zoom. And please, please feel free to share with me what you felt when you saw what was in it.

What if its creators had aimed at slightly more common goals, maybe it would have actually been brilliant, a home run like Hosoda's Summer Wars?

In its current state, the film is beautiful, but also frustrating and confusing, often infuriatingly so.

Still, I'm glad to have seen it on the big screen, and am debating with myself whether or not to shell out big bucks for the Japanese Special Edition Blu-ray set (out later this year). Because odd and flawed as it is, it sure is one hell of a ride, and any single part of it is gorgeous. If only it all came together a bit more coherently...