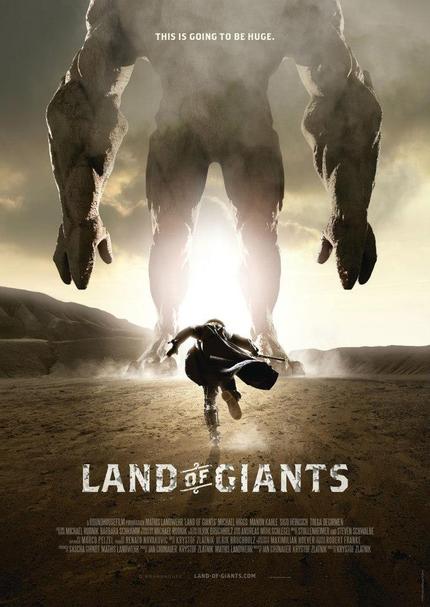 Though you may not know his name there's a passably good chance you've witnessed German martial artist Mathis Landwehr in action. Based in Berlin, Landwehr caught the eye of the Wachowskis sometime back and put in work as a key stunt performer on both V For Vendetta and Speed Racer. We'd been talking about him prior to that in these pages, though, thanks to his work in indie action flick Kampfensage and again raved over his work in stellar short film Kingz.

Landwehr is one of our favorites, basically, and we've been waiting years now for him to get his break on the big screen. Because while the stuff he's been doing on TV is fine and all - and certainly pays his bills - we're very much of the opinion that he deserves an audience larger than what German television will give him.

And apparently he agrees because he's taken and active part in shaping his next project, an apocalyptic steampunk scifi actioner titled Land Of Giants - a project which crowdfunded a twelve minute pilot / proof of concept in hopes of securing the funds for either a feature or television version.

After the storm reduced our world to ruins, the Giants came to us, to punish those who would ever again lay their hands on the magic called "Electricity".

A long time ago Crutch (Mathis Landwehr) challenged the Giants' anger. His destroyed knee won't let him forget the day, they took everything from him. So he ventured out to hunt and kill them.

The pilot arrived online yesterday and it's an intriguing bit of work. Check it below.

Do you feel this content is inappropriate or infringes upon your rights? Click here to report it, or see our DMCA policy.
land of giantsmartial artsmathis landwehrsteampunk

Whole lotta nadda in this here teaser. I was hoping for Shadow Of The Colossus, not a DustDevil/Hardware knock-off.

The giant looks pretty cool, but I hope these baddies will have a higher appearance-ratio in the finished product.

I'm all about new talent in the martial arts genre, but I can do without the music video-y slow mo action to Linkin Park-y soundtrack. (The Raid would've been just fine without it.)

If I'm not mistaken 'Shadow of the Colossus' actually has it's own movie coming.

That it does. But this teaser has much less to do with the poster/description and much more to do with Mortal Combat: Conquest.

Landwehr is a great stuntman and martial artist but damn, he´s an godawful actor. There was a short lived german tv-series with him in the lead and it was terrible! Good thing he can punch and kick his way out of a paper bag, cause he surely can´t act his way out of it!

In what way is it a knockoff of those two dis-separate movies? If anything it's closer to a mix of Book of Eli and Attack on Titan. Maybe a bit of Screamers. Besides, it's a teaser, so they're saving some for the second trailer.

Though I suppose it would be good to know how they will handle that kind of fighting before throwing money at it.