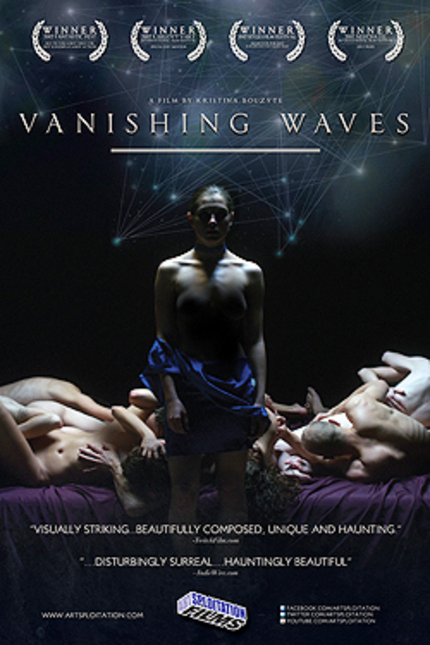 After a successful run on the festival circuit, Vanishing Waves is making its way to America.

Our own Brian Clark described it as "an exquisite sci-fi head trip in the vein of Solaris and 2001: A Space Odyssey, one which takes pleasure in ideas and exploration rather than cheap thrills. As a bonus, it's also sexier than either of those movies. Rather than taking viewers to the outer limits, Lithuanian writer/director Kristina Buožytė is concerned solely with the depths of the human mind, and all the confusion, joy, sex and pain competing for space within."

As to the plot, here's the official synopsis from U.S. distributor Artsploitation Films:


Lukas (Marius Jampolskis) is assisting a scientific research team by functioning as a patient in a series of heavily monitored (and medicated) sensory deprivation experiments wherein he is attempting to make some form of contact with the subject, Aurora (Jurga Jutaite), a young woman who has been locked in a comatose state for some time. Doctors initially hope for just a vague reaffirmation of consciousness, but the experiment takes an unexpected twist when Lukas and Aurora actually develop a strong psychic link in their mutually altered forms of consciousness...and their link quickly evolves into a romantic, sexually charged relationship. As Lukas hides this data from his researchers, he and Aurora meet secretly and passionately in a series of surreal dreamscapes created by their collective minds, but their union is tragically doomed to collapse around them.

The film will open in New York on March 15 and in Los Angeles on April 12. Check the official site for more information.