Review: Say Yes to NO 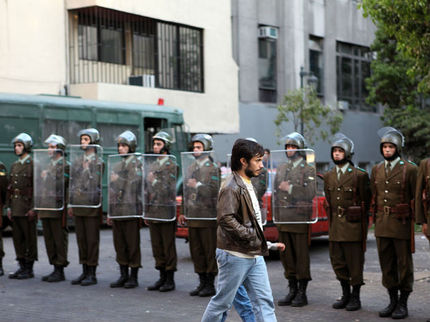 I assume you're well-versed in Chilean politics of the 1980s. I mean, who isn't, right? But even if you're not -- even if you're, say, an American who barely recalls the name Pinochet and is already exhausted by the 2012 U.S. elections -- Pablo Larraín's NO is a fascinating, inventive look at the advertising campaign that helped unseat Chile's dictator in 1988. What happens in NO isn't substantially different from what happens in every election year in every country. Which is to say, it's absurd, funny, and a little sad.

NO was made for a Chilean audience, but Larraín is careful to summarize the pertinent facts for the rest of us (and, I suppose, for Chileans who weren't alive or weren't paying attention in 1988). Gen. Augusto Pinochet, dictatorial president of Chile since a coup in 1973, has agreed to allow a vote on whether he will remain in power for another eight years, or whether the country will hold an open election to replace him. The referendum boils down to two simple choices: YES means more Pinochet; NO means no.

Each side is allowed 15 minutes of TV advertising per day, for four weeks leading up to the vote. The YES campaign has all the might of the Chilean government behind it, and the patricians running it are smugly confident that the dirty commie rabble-rousers behind NO will not succeed, never mind the torture, murders, and other atrocities that Pinochet has been responsible for. The NO campaign, on the other hand, is a multifarious group covering more than a dozen different political parties whose only common ground is that they all want Pinochet gone.

Enter René Saavedra (Gael Garcia Bernal), a scruffy ad-man who's been making a name for himself as a producer of slick, youth-oriented cola commercials and the like. He's recruited to oversee the NO campaign, displeasing his boss, Guzman (Alfredo Castro), who's moonlighting on the YES campaign himself. Saavedra's estranged wife, a political activist named Veronica (Antonia Zegers), thinks the vote is a sham, and that Pinochet will simply ignore the results if NO wins. She's not alone. In fact, the major problem facing NO isn't getting people to wish for Pinochet's ouster -- that sentiment is widespread -- but in getting them to believe it's safe to say so. Pinochet has a well-deserved reputation for making political dissidents disappear. 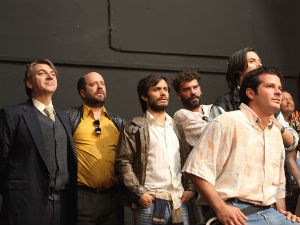 Saavedra brings to the NO campaign a much-needed sense of media savvy. The strident, idealistic men and women who have been handling it to this point have focused their TV spots on listing Pinochet's offenses, with grim footage of police violence and oppression. Saavedra takes it in a different direction, commissioning upbeat jingles and optimistic commercials emphasizing how much better Chile will be if everyone votes NO. The new slogan: "Happiness is coming!"

Larraín's crafty innovation is to use as much footage of the actual 1988 TV commercials as he could get his hands on -- and to shoot the rest of the film so that it looks similarly washed-out and VHS-y. As a result, there is no visual disconnect between Saavedra and his cohorts planning their campaign and the chunks of the campaign that we see. It's impossible for the casual observer to tell which parts of NO are from 24 years ago and which are careful recreations (except, obviously, for the presence of people like Gael Garcia Bernal).

More importantly, this visual style gives the film a sense of immediacy. The people planning the TV ads -- whose very lives may be in danger as NO gains traction and YES starts to get nervous -- inhabit the same analogue, low-fi world as the commercials they produce. We laugh, as Larraín intends, at the cheesiness of late-'80s fashions and technology, and the inelegance of some of the ads. ("We're uncomfortable with his literature!" is the literal translation of an anti-Pinochet song lyric.) But we also understand, on a subconscious level, that these characters live in this world. This matters.

The back-and-forth between the YES and NO campaigns in Chile in 1988 is fundamentally the same as between the Republicans and Democrats in America in 2012 (or any year, really). Some strategies work better than others; mud-slinging is simultaneously decried and practiced; everyone knows that sound bites and slogans count as much as policies and positions. YES paints NO as nothing but rowdy, disorganized socialists; NO (which has the artists and actors on their side) depicts YES as wealthy, complacent fascists. The parallels to last year's Occupy movement are obvious and thought-provoking.

But make no mistake, NO is also a lot of fun. With a zippy screenplay by Pedro Peirano (based on an unproduced play by exiled Chilean novelist Antonio Skarmeta), the film allows for good old-fashioned drama and intrigue in addition to the political activism. Though there is outrage behind some of the characters' sentiments, the film is sly and frequently very funny rather than angry. This is probably the best fact-based account of 1980s Chilean political advertising that I've seen this year.

Review originally published during the Telluride Film Festival in September 2012. Subsequently, the film was nominated for an Academy Award as Best Foreign Language Film. NO opens in limited release in the U.S. on Friday, February 15. Check the official site for more information