Following their release of Mads Brugger's The Ambassador, Drafthouse Films tackled a pair of very different rep titles, and the result is a pair of extremely different, but extremely entertaining features, the likes of which we don't see too often.
Those films, YK Kim's Miami Connection and Ted Kotcheff's Wake in Fright, are among the finest films I saw in 2012. The third title is their website exclusive trailer compilation, Trailer War, which is a boatload of fun and a great primer to the attitude and spirit from whence the Alamo Drafthouse sprang.

Miami Connection:
I don't know if I had a more enjoyable theatrical experience than my first night at Fantastic Fest 2012. Seated with a team of trash aficionados, Rewind This! director Josh Johnson, ScreenAnarchy sleaze fan Charlie Hobbs, and Canuxploitation/Rue Morgue writer Paul Corupe, I braced myself for what was being described as one of the greatest films ever. Holy crap. I've never been seated with a more appropriate audience for a film in all of my life. This trash-terpiece of 80s action cinema blew me away, so much so that I went and saw it again when it toured Dallas a few months later. Revisiting it on Blu-ray was a joy. Here's what Hobbs had to say:

Grandmaster YK Kim is the leader of Dragon Sound, both a new dimension in rock 'n roll AND leader of an anti-gang/cocaine/hoodlum/sadness crew to end all crews. Where do I begin. Darlin', you know I'm not much of an optimist, and it takes a lot to drag me out of my shell, but Kim's RELENTLESS optimism is infectious. There's nothing better at the end of a long night of rockin' out to songs about Tae Kwon Do and friendship, than a good old fashioned pizza party at your adult home for orphans/grown-up clubhouse. You really know how to bring a family together, Grandmaster YK Kim. Whether it's uncomfortable sounding, clearly improvised teasing from untrained actors, or playing "got your nose" onstage using your feet and the nose of your emotionally fragile keyboard player, you know just how to make me smile.

Sure, you aren't perfect. I mean, a lot of the dialogue was badly overdubbed, many of fight scenes are poorly choreographed, the script is non-existent, and no one on screen could act their way out of a paper bag, but, hey, nobody's perfect! I enjoy all of your imperfections as the pieces of you hat make you stand out. A diamond in the rough is still a diamond, and you are the jewel of my life...

I guess what I'm tryin' to say, Baby, is that, I want this to last forever. I know you're only 90 minutes long, but it isn't the size that matters, it's the motion of the ocean, and Honey, you've started a tidal wave in my loins. I want to spent the rest of my life reliving your ass-kicking, tickle-fight-havin', positive-mental-attitude-espousing, ninja-fightin', motorcycle racin', mustache-and-jheri-curl-wearin', cocaine-hatin' times over and over again.

The Blu-ray from Drafthouse Films starts out with a warning that the materials were nearly destroyed in a hurricane and that the ensuing presentation is the best they could do. I'm not going to lie, it is rough. The image quality is less than stellar, but the sound is pretty decent most of the time, and when Dragon Sound kicks out the jams, I dare you to keep the volume low. It can't be done! The extras are pretty fantastic and consist of both archival deleted scenes and newly created featurettes, all of which should sate the most rabid of Miami Connection geeks. Overall, it's a great release of a film that has to be seen to be believed. 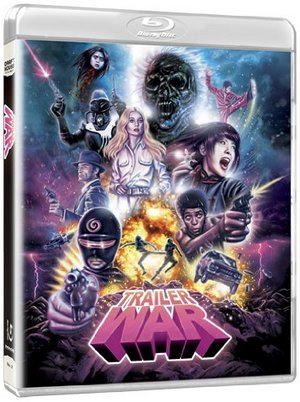 Trailer War:
Grindhouse trailer collections are always great fun, and Drafthouse Films' first stab, Trailer War, is no exception. It doesn't quite match up to Synapse Films' four hour epic masterpiece, 42nd Street Forever on Blu-ray, but it's a solid entry, and hopefully the first of many. While I took 90 minutes out of my life for this, I think I'll let them speak for themselves when it comes to a synopsis:

Unleashed from the vaults of the Alamo Drafthouse, a meticulous selection of the best, strangest and most amazing coming attraction trailers in the world! Most have never been available in any home format, and all are presented for the first time in high definition. From the high flying, explosive metal mayhem of STUNT ROCK to THUNDER COPS' disembodied flying head chaos, each 3 minute masterpiece is like a beckoning portal to another, more exciting dimension. It's a crippling overdose of towering flames, mechanized destruction, lurking fear, poor sexual choices and spiritual devastation on an apocalyptic scale. You might want to have a cornea donor standing by just in case...because THIS IS GOING TO BURN!

As one should expect, the image and sound quality vary wildly from trailer to trailer. Some looks fine, some are really rough, but all are great. One of the best parts of this disc is the commentary track from Drafthouse programming vets Lars Nilsen and the soon-to-depart Zack Carlson, which shows that these guys are the real deal when it comes to film geekery. Another neat feature is a small piece with director Joe Dante (Gremlins), who talks about the art of exploitation trailer cutting, a topic on which he is an expert, as one of the men on staff with Roger Corman in the early 70s. Really great stuff! A list of the trailers can be found easily by use of Google, so have at it if you must know, but I think that the surprise is part of the fun! 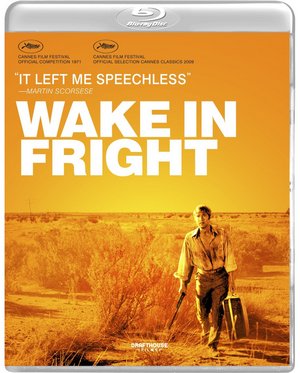 Wake in Fright:
Wake in Fright (Outback) is an epic masterpiece that combines the best of the Australian new wave and Ozploitation of the 70s. Canadian director Ted Kotcheff (Rambo: First Blood) took a novel and adapted it into one of the most grueling film representations of machismo run amok that the world has ever seen. Anchored by the manic supporting performance of a completely unhinged Donald Pleasence, Wake in Fright is a work that demands to be seen. Here's what I had to say about the film when it screened at Fantastic Fest 2012:

School teacher John Grant (Gary Bond) is eager to leave his rural schoolhouse assignment in tiny Tiboonda. So when his semester ends, he catches the train to the nearest city big enough to have an airport in the hope of catching the first flight back to Sydney. That city just happens to be Bundanyabba, a mining town filled with hard drinkers who like their action fast, hard, and rough. These are the kind of guys who like a good fight almost as much as they like a good kill out in the Outback. When Grant falls into a gambling den and gets a taste of success, he sees his opportunity to buy his ticket out of the sticks. Instead, he loses everything and has to find a way out of The Yabba... which isn't going to be easy...

Wake in Fright is as much a psychological thriller as a horror or exploitation flick. There's no doubt that the film will play well among the new breed of exploitation fanatics. However, there is both too much and too little to satiate the casual viewer without deeper exploration. The first forty minutes or so of the film are relatively aimless. The pacing is very deliberate and the action is sparse. You really have to become invested in the characters enough to build psychic connections with everyone in the film, not just John Grant. He's got quite a crew of burly Outback cohorts who are determined to make him into their kind of man, hence the kangaroo excursion and the rest of the testosterone soaked shenanigans. If you can make it through that piece, the film really takes on a life of its own. It doesn't become any more linear in terms of plot, but Kotcheff's intentions become clear, and we're off to the races.

Wake in Fright comes to Blu-ray courtesy of a 2009 restoration that had already been released on Blu-ray in Australia before coming here. The resulting HD experience is less than perfect, but certainly a step up from anything we'd seen before, according to everyone who knows about these things. The image lacks some depth and seems to be lacking in natural grain as well, but overall I wasn't horrified. The audio is very satisfactory, though, no complaints there. The extras are mostly ported over from that Australian Blu, which is good because they were very good. In addition, Drafthouse Films has included a great booklet full of essays. Booklets are my favorite things ever, so this wins over the Aussie disc there alone. An amazing film in a Region A friendly presentation is a big win.
Tweet Post Submit

More about Wake in Fright