(Crime doesn't pay... but it can further your acting career!)

In 2010 the International Film Festival Rotterdam dedicated an entire programme section to films from Africa, and there has been a strong African presence at the festival ever since. This year, the IFFR caught the submission from Kenya to the Oscar for Best Foreign Film: Nairobi Half Life, which tells the story of a young car thief who leads a secret double life as a stage actor.

During its screenings in Rotterdam, the film turned out to be a big crowdpleaser, becoming one of the most popular titles this year. Rightfully so? Read on!

Young Mwas is crazy about films, quoting them ad verbatim whenever possible. One day he follows his dreams and moves to Nairobi to become an actor. Alas, within minutes of his arrival he is robbed and thrown into jail. Worse, he now owes money to some scary criminals.

But Mwas is not the kind of guy who lets such noise stop him. His cocky demeanor gets him a small role in a local theater production, and to support himself he joins a gang of car thieves. This double life turns out to be very advantageous, as the experiences learned in one world can be used as skills in the other...

If there is an award for "Most Disgusting Toilet Shown In A Film," this should without a doubt be awarded to Nairobi Half Life. Forget the Scottish toilets in Trainspotting or the secret entrance in Desperado: the Nairobi prison toilet wins two hands down. Although "two hands down" is the last thing you'd want to do there. Brrr...

This remarkable bit of "couleur locale" is encountered pretty early on in the movie, and while it doesn't set the tone, it does show that director David 'Tosh' Gitonga is not afraid to go full tilt whenever he thinks it will benefit his film. It also shows he is not interested in painting a particularly glamorous view of Kenya's capital city, and I'm willing to bet Nairobi's tourist board will not mention this film in a hurry. 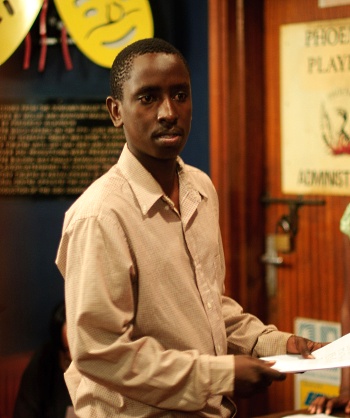 What he does show is a city which teems with life and crime, lovingly called "Nairobbery" even by its own citizens. There is a big rift between the VERY rich who live in fortified mansions and the VERY poor, who have to get by through all sorts of unsavory deeds.

However, there is a surprising lack of preaching in Nairobi Half Life, with neither the rich nor the poor being judged in any way. This story is about Mwas' adventure of becoming an actor, and any criticism encountered along the way is being aimed at the local authorities who allow excesses and escalations to thrive. Life is pretty damn cheap in Nairobi, according to this film, and the police may have the dirtiest hands of all. Well, except maybe for the poor sod who has to clean the prison toilet...

Nairobi Half Life is one of many debut films at this year's festival, but it is also one of the few where that doesn't show at all. David Gitonga never lingers, never stops, but tells the story with a lot of speed and verve. His film is straight entertainment, and he even exaggerates the proceedings somewhat in typical Hollywood fashion. Things come together a bit too slick, too smooth, with a few coincidences too many perhaps. But the desire to tell a cracking yarn never hamstrings the film, and the frownworthy "yeah, right" moments accentuate just how difficult life in Nairobi must be if you're not as filthy lucky as Mwas is at times.

Speaking of Mwas, he is confidently played by newcomer Joseph Wairimu. Likable even when arrogant, you can't help but stay on Mwas' side even when he is carjacking an SUV from an innocent couple at gunpoint. Mwas is a big film geek and attacks each problem in life with admirable fervor, so it is hard to get angry at him. He is a marvelous central character to have in a film, and Joseph obviously has fun playing him. Together, David Gitonga and Joseph Wairimu avoid the pitfall of making Mwas either superhuman or (worse) a caricature, and Nairobi Half Life is all the better for it.

With its two-timing, upbeat protagonist and fast-paced tempo, Nairobi Half Life is a fun adventure to watch. The implausibilities in the plot may be hard to swallow for many, but the filmmakers can hardly be accused of painting too rosy a picture of Nairobi here. A masterpiece it isn't, but it certainly works as flashy entertainment.

The Rotterdam audiences were very amused and awarded Nairobi Half Life a WHOPPING 4.5 out of 5, landing it in the festival's top 10.