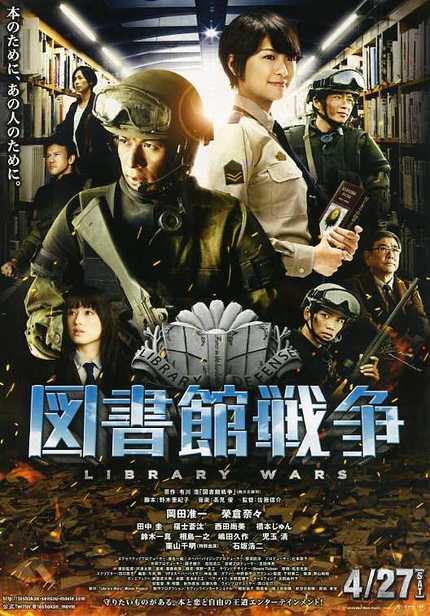 There is a small crop of sci-fi films that deal with a utilitarian society where book censorship is heavily enforced, while a small group resisting against this law, like Fahrenheit 451 and Equilibrium. But I think Library Wars (aka Toshokan Sensō) is the first to stage a full fledged assault from two military forces in an actual library of all places.  These librarians really take book preservation seriously.

In 2019, public anger at media excess has led to censorship of television, newspapers, the internet, books, movies, and music under the 'Media Betterment Act'. To fight the armed 'Betterment Squads' that go around destroying objectionable materials, the nation's libraries have formed their own para-military 'Library Corps'. Iku Kasahara is a new recruit to the corps, where her instructor and squad leader is Atsushi Dojo. At first repelled by his by-the-book approach to leadership, she is gradually won over by his commitment to their battle for 'books' and 'the freedom to know'.