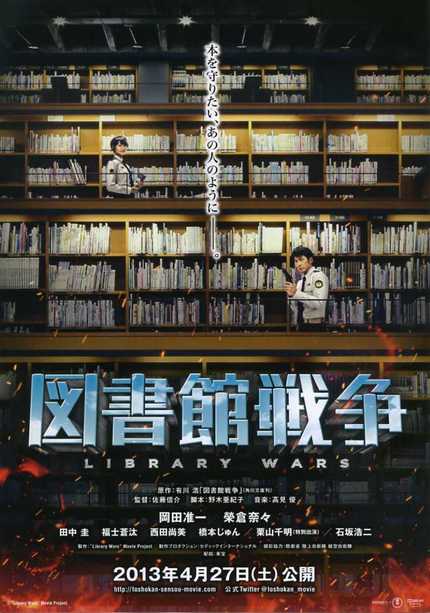 From Sato Shinsuke, the director of Gantz and The Princess Blade comes yet another live action adaptation Library Wars (aka Toshokan Sensō).  Based on a Japanese light novel series by Hiro Arikawa that spawned a manga and animated series & film, the social sci-fi depicts a battle between two opposing groups on the issue of book censorship laws in dystopian Japan.

Set in the year 2019 in Japan. In order to crack down on free expression, a new law is passed, which allows for the government to create an armed force to find and destroy objectionable printed material. Meanwhile, to oppose this oppressive crackdown, the Library Force is created. The Library force, including instructor Atsushi Dojo (Junichi Okada) and Iku Kasahara (Nana Eikura), work to protect the libraries. A fierce battle then ensues between these two groups.

The cast also include Chiaki Kuriyama, Kei Tanaka, Sota Fukushi and Koji Ishizaka.  Library Wars is due out on April 27th.  You'll find the 30-second teaser embedded below.