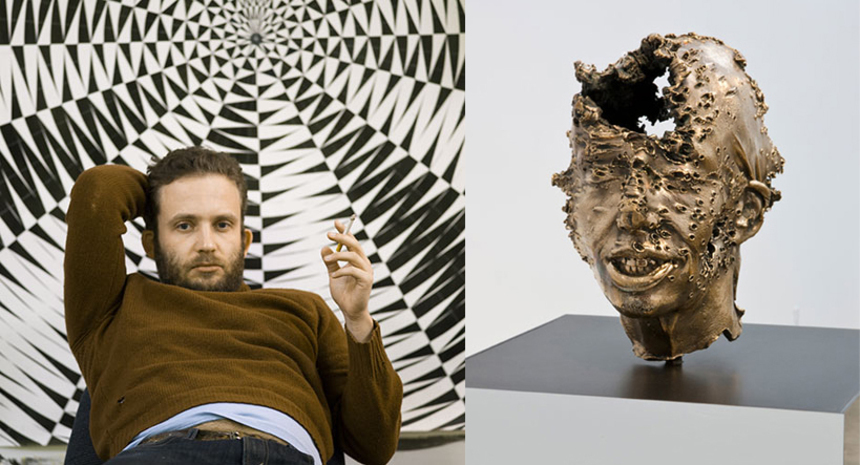 Visual artist Julian Hoeber has a flair for the dramatic. His busy hands range from painting, sculpturing (see the terrifyingly awesome image above), photography, installations, a "freestanding structure based on the architecture of 'gravitational mystery spots," filmmaker, and now, horror documentarian.

In his latest piece, entitled Where is the Money?, Hoeber dissects the horror genre, from when it (perhaps) began with Gustav Courbet's painting Burial at Ornans, to lo-fi grindhouse films in the early 70s all the way up to today's big-budget blockbusters. Using various clips from Freaks, The Texas Chainsaw Massacre, The Exorcist, Scream, House of the Devil, and more, U.S. radio correspondent Barbara Bogaev narrates Hoeber's 13-minute short on poverty and violence through horror filmmaking from the early stages.

Recently, ScreenAnarchy chatted with Hoeber about the process of making Where's the Money?. Below is the interview, followed by the short. It's best to feast your eyes on the video, then read the interview. Enjoy! And a very big thanks to MOCAtv for setting this up.

Twitch: WHERE'S THE MONEY? is a short documentary that tells the story through a narrator and a series of clips from cult horror films -- from FREAKS, to exploitation, to SCREAM, to Ti West's throwback, HOUSE OF THE DEVIL. What was the process of deciding which films to include?

Julian Hoeber: Some of the films, like Last House on the Left (1972), were included because they are what spurred me to write in the first place. When I started writing I was looking at a lot of Herschell Gordon-Lewis and 70s revenge pictures and I wanted to explain what produced the particular feelings those films evoke. As I wrote an argument formed and other films fed into that argument. Most of the choices come from the way they exemplify points I was trying to make. Films like Hostel and Turistas make the points clearly. Very little commentary from me is necessary.

An important part of this short is the narrator. What influenced you to use Barbara Bogaev?

Most of the imagery in the piece is harsh. It would have been very easy for the piece to be dominated by the thrill of those clips and I wanted to temper that so that the argument could be absorbed. Ms. Bogaev has a calming voice and a very sober tone. I also felt it was important to have a woman speaking as the voice of authority to counteract the often present "damsel-in-distress" element common to many horror films.

You seem to have an admiration for terror. Why are horror films are so fascinating to you? It seems that the escape from reality is the obvious answer, but is there more to that for you?

I actually don't enjoy horror films more than other films. I do think that the desire to be scared as an entertainment is endlessly interesting. I also think a lot of intelligence in terms of filmmaking as well as a reflection of cultural unconscious shows up in horror films because they aren't usually self-important. The fact that horror films still upset people -- horror films are once again being blamed for real violence in the world -- proves that they are worth thinking about and talking about in a serious way. I also think violence on film is a special realm of creativity. The human body becomes sculptural material in a lot of horror films and there's often real fertile imagination at work.

What are your favorite horror films?

I love the original Last House and even more the film it was based on The Virgin Spring, directed by Ingmar Bergman. I like the Italian cannibal films from the late 70s that I've seen. Of things I've seen in the last ten years, I think Hostel is brilliant. I love Eyes Without a Face by Georges Franju and the original Cat People, [John] Carpenter's The Thing and [George] Romero's Dawn of the Dead are both undeniable greats. I also think Herschell Gordon-Lewis is a director that should be taken more seriously. His horror films are much smarter than people give credit and his non-horror films are perverse and morally conflicted in a really good way.

You made a short film in 2001 called KILLING FRIENDS. Do you have any plans to make a feature?

I've written a feature and I'd love to make it, but I move a bit slowly with these things. I started writing Where Is The Money? ten years ago, so the feature may take a while, unless someone lights a fire under me by funding it.

You've done a variety of art, from canvas to sculptures to video. Which do you find expresses your thoughts more clearly and what you're trying to say?

That really depends on what I'm trying to say. Each idea deserves the medium which carries it best. I don't have favorites in that way.

After watching WHERE IS THE MONEY?, what do you want the viewers to take away from it?

I'd like them to think about how horror films are worth real analysis. I'd like cinefiles to find more cultural importance in horror films, which I think are still a bit devalued. I'd like horror fans who usually revel in the thrill of the films to think more critically about how the films work. I'd also like more people to see some of the lesser known films I borrowed clips from. It's important to me that the people who made the films I refer to get their work seen and taken seriously as part of a bigger conversation about the world we live in.

Horror is inherently linked to the real, as elucidated in Julian Hoeber's masterful video composition, Where Is the Money? Written and directed by Hoeber, the video's form plays reflexively with genre as American radio journalist Barbara Bogaev's polished, emotionally neutral narration moderates the violent imagery and politics of the low-budget horror movies that are the subject of this work. Where Is the Money? Begins with Gustav Courbet's Burial at Ornans (1850). Courbet's painting was a turning point in French 19th century painting because it was a realistic and unflattering depiction of a peasant funeral rendered in a scale usually reserved for religious and heroic paintings -- "it was a new idea of what could be shown in a picture at all."

Using Ornans as a jumping-off point, Where is the Money? is a gripping examination of the relationship between fear, poverty, and the real in low-budget, avant-garde, and blockbuster horror films of the 20th century ---- including Un Chien Andalou, The Last House on the Left, Scream, The Texas Chainsaw Massacre, Hostel, and The Exorcist. Hoeber expands on the idea that the primary horror of post-9/11 cinema comes in the form of Americans tortured by vengeful and impoverished third-world nations..., while unglossed and genuine representations of American poverty remain largely absent because the current economic crisis is perhaps too horrific and too real for us to deal with.

Do you feel this content is inappropriate or infringes upon your rights? Click here to report it, or see our DMCA policy.
FreaksHostelHouse of the DevilScreamThe ExorcistThe Last House on the LeftThe Texas Chainsaw MassacreUn Chien Andalou