Danny Trejo Is Out For Blood And Funding For SNAP SHOT 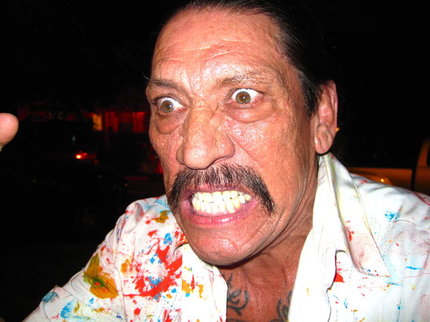 The proposed film follows a young, ambitious photographer who gets caught in a harrowing labyrinth of intrigue and danger when the "wrong" camera falls into his possession. The devil is truly in the details; and in this case in the 35mm photographs, as sinister wrongdoings frighteningly emerge within the images garnered from the now unfortunate find.

Trejo had this to say about his directors previous award winning effort - "Modus Operandi reminded me a lot of working with Robert (Rodriguez). Guys like that have an incredible vision and I'm excited to see what Frankie does with this (Snap Shot) story."

Not one to play around, Trejo will put a hurt on Mr. Latina if they don't get the money to make their project a reality, which this video proves. Do your part. Donate. Save a life.

Watch the proposal below the break and then head to the Kickstarter page or, well... ya know.

Do you feel this content is inappropriate or infringes upon your rights? Click here to report it, or see our DMCA policy.
Danny TrejoFrankie LatinaSnap Shot