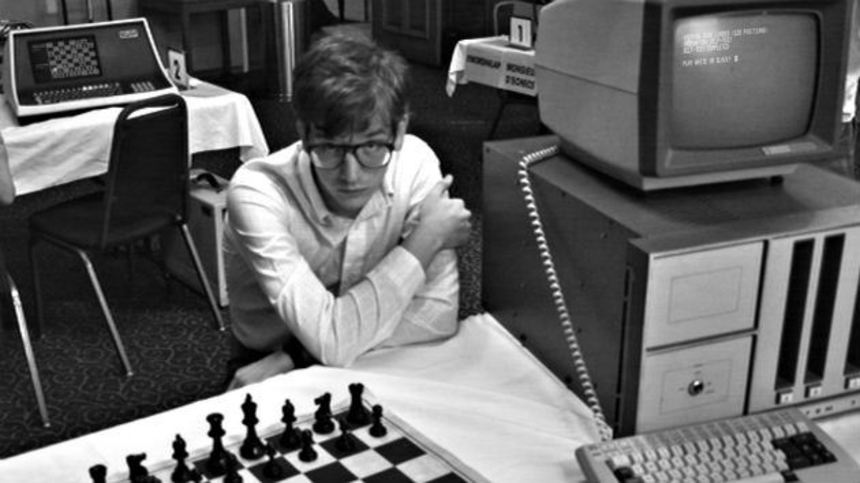 Despite the fact that Computer Chess is a movie about programmers competing to change the way humans perceive computers, it's about as far removed from the cutthroat melodrama of The Social Network or Pirates of Silicon Valley as a movie can possibly get.
Instead, director Andrew Bujalski has crafted a much stranger, funnier and occasionally frustrating portrait of a group of oddballs trying to push computer intelligence to the next level. At times it recalls Robert Altman's wry, observational ensemble pieces -- think Nashville, Health and Ready to Wear -- but, ultimately, Bujalski makes the material his own, with an even looser, freer-flowing structure than Altman, a healthy dose of the psychedelic, and by going aesthetically where few filmmakers dare to tread.

The setting is a computer programming convention, circa 1980. More specifically, it's a programming convention that revolves around a computer chess tournament. Teams from all over the U.S. have arrived, lugging their huge machines, armed with programs and logarithms
that they hope will dominate the mechanized competition, and even the human host who has agreed to challenge the winning computer to a match.

While the film certainly spends ample time at the tournament itself, Bujalski is far more interested in the environment and the characters who inhabit it. This is an era where computers were a specialized field, without cool celebrity programmers like Mark Zuckerberg and Sean Parker, where "nerds" were actually the ones who spent every waking minute interacting with machines and writing code, and as a result, weren't terribly well-adjusted to social norms.

While it'd be easy to fall into caricature here, Bujalski keeps the jabs at 80s nerd culture affectionate. In many ways, the film is incredibly respectful of the dedication and passion with which the group pursues its odd goal, and many of the most absurd characters emerge with a quiet, admirable dignity in the end. Bujalski's gift for awkward, comic conversation that he honed in Beeswax, Mutual Appreciation and Funny Ha Ha serves him well, and actually plays even better when placed in such a unique, specific world.

Obviously, watching a film now about a group of people trying to push machines closer to the level of humans is inextricably laced with existential questions about progress, the role of technology today and so on. For the most part, Bujalski wisely lets the subtext linger without drawing attention to it, though the few times that the film dips into self-conscious, prophetic jokes ("I think computers will eventually be used for dating," guesses one character.) are a bit grating. Overall though, it's a relaxed, fascinating and often hilarious couple of days in the lives of of an eccentric group of digital warriors.

During the post-screening Q&A, someone mentioned that, with all the characters and potential plot lines, the film felt like it could be spun off into a TV show. On one hand, narratively speaking, the person had a point -- It could totally play as something along the lines of The Office. Except that, as is, Computer Chess would never play on mainstream TV. Which brings me, finally, to the aesthetic.

The film is shot in black and white on a vintage 1969 video camera. The aesthetic is extremely effective for establishing the period setting and, given the subject matter, an incredibly inspired choice. It is also muddy, low-contrast, soft and sometimes headache-inducing to watch. Right off the bat I respected the choice, but as the film wore on, I went back and forth about whether I actually liked it. Towards the end, when the film seems to spin out of control and Bujalski starts using some surprisingly effective, psychedelic low-fi video effects, I gave into his choice completely. But, most likely, not everyone will be so forgiving. You know who you are, and you've been warned.