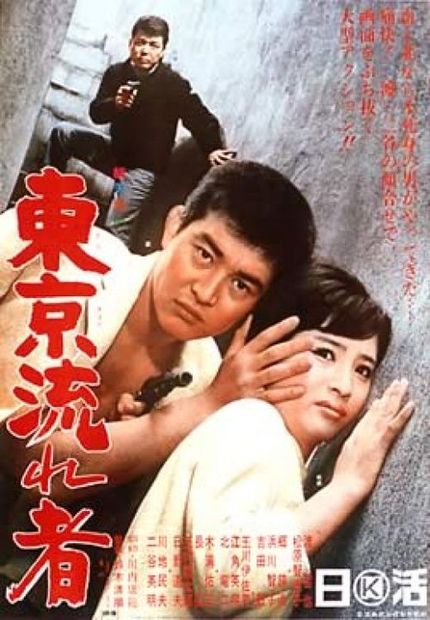 The TIFF Bell Lightbox here in Toronto announced today a major Japanese focus for the upcoming winter season with three major Japanese themed programs among them Japanese Divas: The Great Actresses of Japanese Cinema's Golden Age and The Catch: Japanese Cinema of the Eighties. And while there are stellar titles in both of these the series closer to our hearts - because the selection was made by yours truly - is Tokyo Drifters: 100 Years of Nikkatsu.

Yes, Nikkatsu are celebrating their hundredth year and ScreenAnarchy is proud to present a selection of twelve titles spanning the Nikkatsu Golden Age, which ran from the opening of their massive sound stage complex through until the company shifted their focus entirely to the production of Roman Porno in the 1970s. Which, if you know the company's history, means lots (though not exclusively) of noir tinged gangster films from the Nikkatsu Action brand. And while we are very definitely taking the opportunity to present some of master director Suzuki Seijun's works on the big screen we are also offering up a focus on lesser known - in the west, at least - directors such as Kurahara Koreyoshi, Kawashima Yuzo and Hasebe Yasuhara.

Here's the complete lineup! You can find more details and order tickets here!

Retaliation (Shima wa moratta)
dir. Yasuharu Hasebe
Japan|1968|94min.|14A
Nikkatsu superstars Joe Shishido, Akira Kobayashi and Meiko Kaji star in this tough and cynical yakuza thriller about an ambitious ex- con who tries to clamber his way to the top of the gangland heap.

Rusty Knife (Sabita naifu)
dir. Toshio Masuda
Japan|1958|90min.|14A
Freshly released from prison, an embittered ex-con goes after the crime syndicate responsible for the rape and suicide of his girlfriend in this gritty, no-nonsense crime thriller.

The Sun in the Last Days of the Shogunate (Bakumatsu taiyoden)
dir. Yuzo Kawashima
Japan | 1957 | 110 min. | 14A
Voted one of the best Japanese films of all time in a poll of Japanese critics, this raucous and cynical comedy follows an amiable trickster as he becomes embroiled in sleazy schemes, revolutionary intrigue and star-crossed love affairs at the dawn of the Meiji Restoration.

The Woman from the Sea (Kaitei kara kita onna)
dir. Koreyoshi Kurahara
Japan|1959|76min.|14A
A yacht-loving youth becomes infatuated by a mysterious young woman he finds adrift on the ocean, in this gorgeously dreamlike fusion of fantasy, romance and horror from Koreyoshi Kurahara.

A Colt Is My Passport (Koruto wa ore no pasupooto)
dir. Takashi Nomura
Japan|1967|84min.|14A
A super-cool hitman and his guitar-strumming sidekick have to shoot their way out of town when they become trapped between rival mobs in this riotous fusion of the French New Wave, spaghetti westerns and Hollywood film noir.

Great time to be in Toronto!

I feel I should point out that an enormous amount of my knowledge in this area comes from Marc Walkow and Mark Schilling. They were my gateway drugs.

I must admit though, some TERUO ISHII would have been nice.

Marc Walkow isn't only a gateway but also an enabler and dealer. He'll get you your Japanese cinema fix.

Of the three non-Suzuki titles I've seen on the big screen, A COLT IS MY PASSPORT is superb, STRAY CAT ROCK (SEX HUNTER) is super fun, and THE WARPED ONES is simply brilliant. Would love to see the others. Great picks, with a good balance to the program.

He was working with Toei through this period.

Crazy excited for this program! What format will they be shown in?

Mostly 35mm, a couple on HD CAM. I can dig up the full breakdown if you want. Highest quality versions available in the world for all of them, soft titling a couple of the more rare ones where subtitled prints don't exist.

My bad, i thought his 60's torture series was Nikkatsu. Looking forward to this series. Thanks.

That's fantastic! I really wasn't expecting any 35mm at all. A full breakdown would be great, thanks!