Review: MOVIE 43 Asks the God of Comedy, "Why Hast Thou Forsaken Me?" 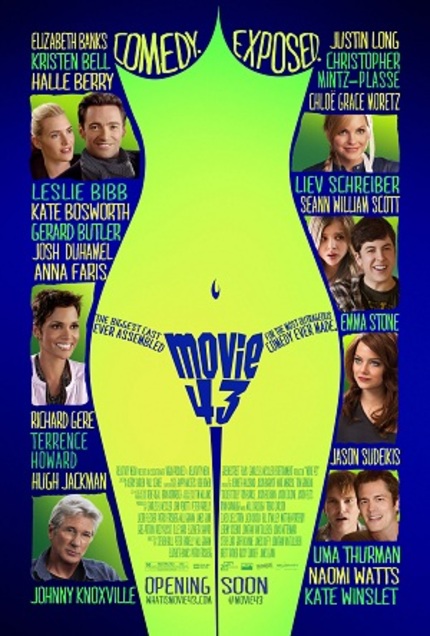 Movie 43 really is an irredeemable experience. As you leave the cinema, you may curse the heavens and cry out, "Why?! Why, oh why, Comedy, did you allow yourself to be violated by the flaccid members of unoriginal, conventional and supremely unfunny influences?'

That previous comment is really about as risqué and 'dirty' that Movie 43 gets, by the way. It is a series of sketches as retold in the framework of a Hollywood (ha-ha, the film industry, am I right?) meeting featuring a crazed guy pitching god-awful ideas for films. Ideas that, for some unfathomable reason, we are then pained to experience as they come to life in random clips that barely segue from one to another.

Peter Farrelly, the main brain and one half of the famous brothers responsible for comedy I genuinely liked, including Me, Myself and Irene and There's Something About Mary, responded to the tidal wave of negativity stemming from North American critics after the film premiered there by stating on his Twitter that "Movie 43 is not the end of the world." He is right, of course. A cataclysmic event like the end of the world would be an exciting and terrifying thing that I would feel obliged to care a hell of a lot about, but Movie 43 is simply what the title implies, a film so generic and lifeless that it gets a bland title. It's a film -- and title -- that is seemingly intended as a parody of the film industry, but it fails to reach even the most basic level of humor.

The tagline on the poster reads 'comedy exposed,' as if the film has an extreme insight into the intricacies of the genre. It damn well should, with directors like Elizabeth Banks and Bob Odenkirk involved; you should expect at least one or two memorable, gut-busting moments, but alas, that doesn't come to pass.

One glance at Odenkirk's masterful Mr. Show With Bob and Dave would provide more laughs than the entirety of Movie 43, as the jokes here and the comedy that should accompany it are absent. The comedy is really 'exposed' in the short trailer for the film that wonderfully highlights every decent moment worth smiling wryly at. Watch that trailer instead, as the rest of the feature-length film is just flimsy filler.

Lowlights of Movie 43 include Hugh Jackman with a scrotum on his neck, a 'joke' that could be considered forgivable if it went the way I expected. Since it's the first joke, I was unaware how far Movie 43 would go in order to avoid shameless, gross-out territory. Yes, the scrotum ends up in soup and almost in Kate Winslet's face; it sounds outrageous, no? No, outrageous would be if he ejaculated from his mouth, but Movie 43 plays it way too safe to offend completely.

Then there is the "iBabe," with Richard Gere in a business meeting that in no way parodies Apple, so this sketch is worthless as well.

One benign sketch is built around a girl (Chloe Moretz) who experiences her period for the first time. It's a sketch that works nicely and is acted out pretty well, but voids itself by ending with a 'pull my finger' gag, which historians concede was funny once upon a time, but does not fly today.

As each segment is a sketch, it is for some reason replete with pointless fake advertisements and needless framing devices. It is not a stretch to say the worst episode of the likes of Mad TV would run rings around Movie 43. The most adept sketch shows, like Saturday Night Live, are naturally going to be hit and miss, but Movie 43 is so lazy and uninspired that, not only does every sketch fail in some significant way, but they just drag on for an intolerable length of time.

In other sketch comedies, the viewer would only have to endure an unfunny segment for two to three minutes, tops, on average. Movie 43 basically consists of super-sized vignettes of cutting-room floor failed sketches that would barely make it to the lamest of network television sketch shows.

Reportedly, Movie 43 cost six million dollars to make, money that can easily be recouped at the box office. However, I urge you not to see this film, as it is nothing more than an experimental cash cow that can shamelessly and easily turn a profit.

Final thoughts: Perhaps its failings extend to the copious amounts of talent involved both in front of and behind the camera. As the adage goes, 'too many cooks spoil the broth.' Movie 43 is a sloppy, toxic, poisonous brew that only does harm to this genre we love so much, and makes you feel a bit of resentment toward those involved.

Movie 43 opens in Australia and New Zealand on February 7.