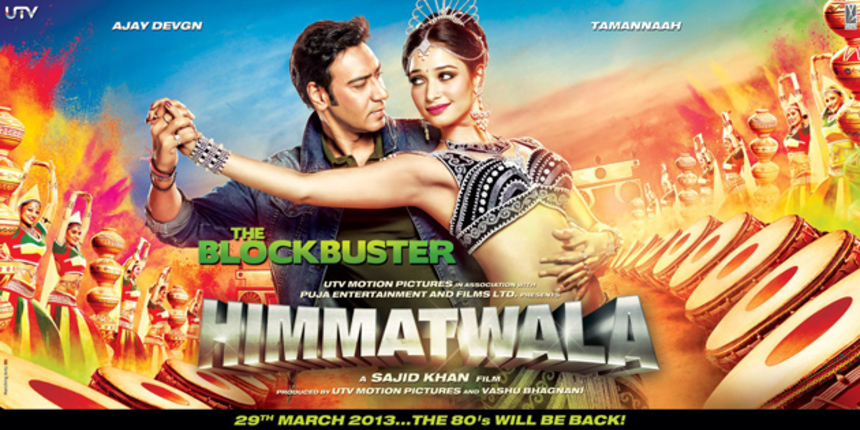 In 2011, Ajay Devgan stepped up to the plate with Singham, a remake of a Tamil film dripping with nostalgia for a time gone by in Hindi cinema. Big ridiculous action is the in thing, and while South India has been doing this stuff consistently for decades, sometimes in the mid-90s, Bollywood tried to "grow up" and grow out of their silly games. Well, it turns out that people really liked those overblown action spectacles, and Singham was a big hit. Back in December, Devgan went back to the well with Son of Sardaar, another cartoonish action film, this time based on Buster Keaton's Our Hospitality/SS Rajamouli's Maryada Ramana. This film didn't set the overseas box office on fire, but back in India it went gangbusters for weeks.

Two high profile remakes later, Devgan is at it again, this time with a remake of 1983's biggest grossing film, K. Raghavendra Rao's Himmatwala. The trailer for the new version looks appropriately ludicrous and filled with action set pieces that will leave you stumped with their complete disregard for physics.

Along for the ride is Tollywood bombshell, Tamannah. She's actually north Indian, but somehow ended up a leading lady in dozens of Tamil and Telugu films before landing back in Bombay for Himmatwala.

The trailer is pretty ridiculous and features Devgan wrestling a tiger, so it has that going for it.