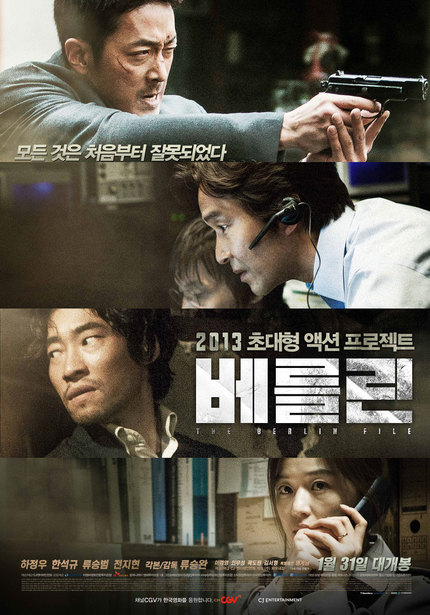 CJ Entertainment has released the trailer for Ryoo Seung-wan's spy thriller The Berlin File, promoting it as Korea's most anticipated action blockbuster of 2013.  From the director of Arahan and City of Violence, Ryoo intends to deliver a realistic and fast-paced espionage film reminiscent of The Bourne Identity. It's interesting to note that 40% of the dialogue is in English, and the film was shot almost entirely in Europe.


Stationed in Berlin, North Korean secret agent and weapons trader Pyo and his embassy staffer wife Ryon lead risky lives. When an arms deal with an Arab organization is exposed, Pyo's intuition tells him that North Korean security is compromised and he becomes the target of investigation by South Korean intelligence agent Chun. Also in the city is Myung-soo. Myung-soo neutralizes North Korean officials in Berlin, and during the succession period after the death of North Korean leader Kim Jung-il he is granted more power and control. When an informant tells Pyo that Ryon is a double agent he sets out to disprove the claim. But witnessing her visit the American Embassy is evidence that he cannot ignore. It brings about a personal crisis that ends with Ryon as Myung-soo's hostage, and a three-way confrontation with Chun and a group of Arab terrorist on the outskirts of Berlin.

More about The Berlin File