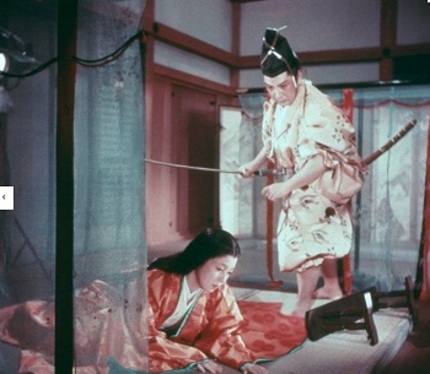 After causing a sensation during the silent era with undisputed classics such as A Page of Madness and Crossroads, Japanese director Kinusaga Teinosuke again wowed audiences decades later with this sumptuous drama. Martin Scorsese has hailed Gate of Hell (aka Jigokumon) as one of the ten greatest colour films of World Cinema, and thanks to Masters of Cinema's fantastic restoration, it's easy to see why.

Gate of Hell is released on dual format Blu-ray/DVD in the UK today, in a newly restored and glorious HD transfer, newly translated optional English subtitles, and a 24-page booklet featuring a new essay by renowned critic Philip Kemp, vintage writing about the film by Carl Theodor Dreyer and rare archival imagery. To mark the occasion you can check out five minutes of this astonishing-looking film below.

During feudal unrest in the 12th century, samurai warrior Moritô (Hasegawa Kazuo) manages to thwart a palace rebellion and save the life of the empress, using loyal subject Lady Kesa (Kyo Machiko) as a decoy. When Moritô is offered anything he should desire as reward, he requests Kesa's hand in marriage. Informed that she is already married to a fellow samurai (Yamagata Isao), he refuses to withdraw his request, setting in motion a tragic chain of events.