Review: TABU is a Glorious Celebration of Cinema and Crocodiles 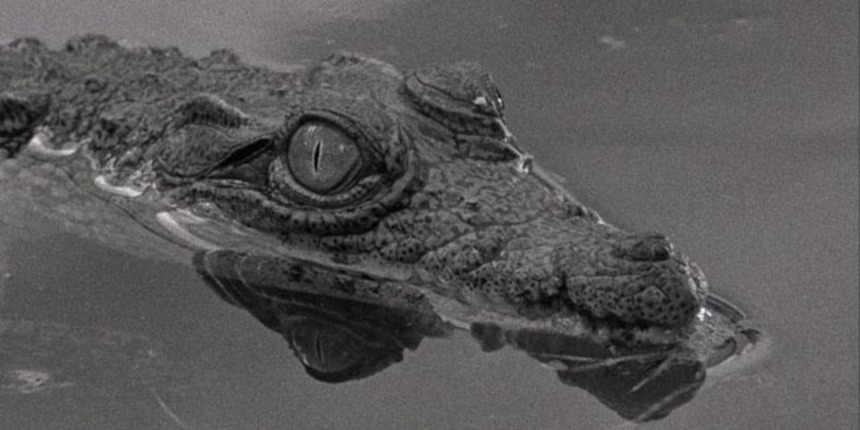 Tabu calls to mind the oft-repeated comparison between film directors and magicians. Indeed, how else but with magic could Portuguese director Miguel Gomes have created such a joyful, enthralling film from this wild mix of historical adventure, deadpan humor, romance, crocodiles, ghosts and silent films?

But after watching a film that imparts such a strong feeling that anything is possible, it seems wrong to even ask the question of how it all works. Also, the aforementioned ingredient list is just a starting point. Gomes also serves up a meaningful meditation on the passage of time and our relationship to the past, using images instead of pointed rhetoric to examine Portugal's history of African colonialism. Ultimately, it's one of those rare films that makes you pause in the middle and remember exactly why you love cinema.

The story is elliptical on a grand scale. It begins with an ancient tale about an explorer seeing the ghost of his ex-wife and then feeding himself to a crocodile. Next, it jumps forward to modern-day Lisbon, and then later, whisks us to colonial Africa, where a woman's pet baby crocodile serves as a major plot catalyst. I don't want to explain exactly how all of this is tied together, because part of the film's magic comes from experiencing the way that Gomes effortlessly glides between all of these seemingly disparate elements.

The portion in modern Lisbon unfolds in gorgeous black and white 35mm photography and chronicles the unlikely relationship between an altruistic woman, her old, senile neighbor and her neighbor's African housekeeper, whom the neighbor suspects of witchcraft. This part of the story unfolds with a quiet, deadpan sense of humor that brings to mind Jim Jarmusch, only with a bit more tenderness and humanity.

And then, before we realize exactly where the movie's going, we're suddenly caught up in a grand, old-fashioned romance-adventure set near a fictional mountain in Colonial Africa named Tabu (which is also, not coincidently, the name of F.W. Murnau's last film). This section eschews dialogue and instead uses sparse narration and grandiose images to tell the story, effectively paying homage to silent films and old Hollywood without ever sacrificing Gomes' modernist touch or sense of humor.

I realize that we don't live in a world where a fragmented, magic-realist adventure about colonialism could ever receive the same attention and mainstream acceptance as a breezy romantic-comedy like The Artist. Nonetheless, with the latter poised to sweep the Oscars, I feel compelled to argue that Tabu is a far superior love-letter to classic cinema. While The Artist pays homage to the surface elements of old movies, and in many cases, the clichés, Tabu manages to capture the heart and soul that made those films so memorable and affecting.

And really, despite the tragedy and history that are integral to Tabu's narrative, it's a film that leaves you ready to spit in the face of reality and hope for the impossible. So, Tabu for Best Picture at the 2013 Oscars! You heard it here first.