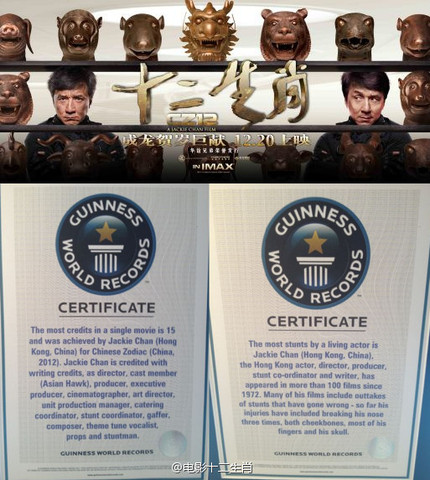 Action legend Jackie Chan has a reputation for being one of the hardest working men in showbiz but now he has two Guinness World Record certificates to back up this claim.  Today Chan was officially awarded "Most Stunts Performed by a Living Actor" and "Most Credits in One Movie" while attending the opening of the Jackie Chan Film Gallery in Shanghai.

I was awarded two Guinness Book of World Records, one of which is "Most Stunts Performed By A Living Actor." I felt I particularly deserved it today. As I look back to the past, so many times to do my utmost, I think it was very worthwhile, because they are records of the past. I can be very proud with them for posterity, saying with the audience that "This is Jackie Chan, Jackie Chan! This is forever!!"

Kudos to Jackie Chan for this monumental achievement! The awards are certainly well-deserved from the guy who literally breaks his back to provide us with quality entertainment.