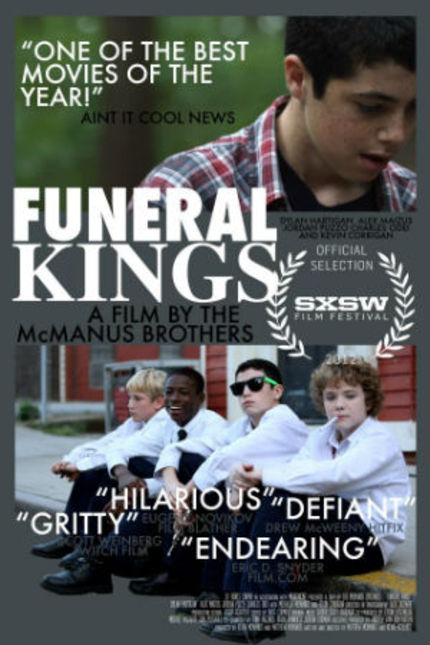 Three 14-year-olds cause all sorts of trouble in and around their Catholic middle school.

Sounds pretty familiar, perhaps, a bit obvious, and possibly even downright dull. I mean, who still makes movies about troublemaking teenagers these days? First-time fraternal-twin filmmakers Kevin and Matthew McManus just made one, and it's sort of great. Sure, it's laden with vulgar talk for some easy laughs, but that's about where the simple stuff ends. At its best moments, Funeral Kings is a mixture of Stand By Me, Superbad, the deservedly obscure Heaven Help Us, and a particularly perceptive, enjoyably gritty independent comedy that knows what it's talking about.

The town is unnamed and the era is unspecified, but our three central characters are the baby-faced Charlie (Alex Maizus), the hyperactive Andy (Dylan Hartigan), and the new kid in town, David (Jordan Puzzo). All aged 14, all profane, and all horny, the boys work as funeral attendants for their school's church. Sounds like a miserable assignment, right? Nope. Charlie, Andy, and David just wait through the service, and then take the rest of the day off from school. (Hence the title Funeral Kings.) Unfortunately, they also get into a bunch of trouble with a local delinquint, several pretty girls, and a mysterious chest that's filled with unknown treasures.

Written with wonderfully vulgar insight and presented by three young leads who are really quite excellent, Funeral Kings feels like a memoir yanked straight from the filmmakers' (or the viewers') youth and then tossed on to a movie screen with an alarming sense of frankness, nostalgia, and reality. For example, I feel certain that this movie takes place in the late '80s, and several of its best scenes feel like they came straight from my own memory banks: the local video store, the casual cruelty that young men often show to one another, the constant fear that everyone at the big party is cooler than you, etc.

The brothers behind Funeral Kings obviously had a much different childhood than I did, but their film is able to tap into some universal truths about "misfit youth," and it presents them with an impressive amount of truth, restraint, and humor. If I've made Funeral Kings sound like a preachy or treacly affair, allow me to clarify: this is a very funny, generally fast-paced, and resoundingly foulmouthed little comedy. It's got some edge and a little hint of darkness, but it's mostly a rather humane tale about how boys are often forced to become "mature" at one of the most egocentric stage of their lives. This is a good little movie.

Do you feel this content is inappropriate or infringes upon your rights? Click here to report it, or see our DMCA policy.
Kevin McManusMatthew McManusDylan HartiganAlex MaizusJordan PuzzoCharles Kwame OdeiComedyDrama