Review: THE MARATHON Takes Its Characters And Runs With Them 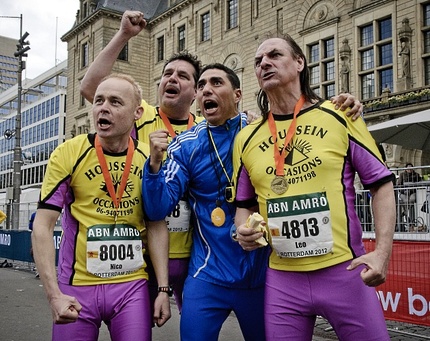 (You don't need to train for six months to watch this film...)

There sure is no shortage of films about a group of underdogs who participate in a seemingly impossible sports event and manage to get farther than expected. It's such a standard feel-good plotline that it no longer even is important whether the persons we're supposed to root for win or lose, as both endings have been done plenty of times before.

Diederick Koopal's first feature film De Marathon is no exception storywise, so that is not where any gold is to be found. Instead, I wanted to see it because of some of the actors and writers involved. On top of that it takes place in the city I have lived in for the past few decades and the sports event described here is the Rotterdam Marathon, which I've participated in twice (and which my wife plans to run next year). For New Yorkers it must be a familiar feeling to see their city take the limelight in any sort of spectacular fashion, but seeing Rotterdam like this is still quite fresh to me!

A small car-fixing garage in the older parts of Rotterdam is about to go bankrupt, owing a debt of 40,000 Euros to the tax office. The workforce consists of Leo, Nico, Kees and owner Gerard: a bunch of fat losers who probably wouldn't ever find a job elsewhere. Realizing this, they concoct a crazy plan to save the garage: to get the money they need, they will all run AND finish the famed Rotterdam Marathon under a strict sponsorship contract.

Against all odds they do find a sponsor willing to cough up the dough, but there is a catch: they ALL need to finish or Gerard loses the garage. With only six months left till the event, the four grudgingly start to train. Problem is: a marathon is 26 miles, and they are lazy and badly out of shape...

Dutch production company Eyeworks has been behind several interesting and unusual Dutch films recently, like New Kids Turbo (and New Kids Nitro), the epic-for-Dutch-standards Nova Zembla, and they're trying to sort out the legal mess surrounding George Sluizer's "stolen" film Dark Blood. You might say the company isn't exactly known for being scared of taking a gamble, and their products tend to be both controversial and impressively polished on a technical level.

When held against the examples above, De Marathon seems almost too safe, too mainstream-feelgood for Eyeworks to be involved in. So color me impressed when the movie starts by introducing its main cast to be truly offensively racist, filthy and capable of shirking any work. The way they all constantly mistreat their Egyptian immigrant colleague (the only one in the "team" doing any actual labor), and try to have him fired at the first signs of financial trouble, is revolting. When the axe starts to come down, it's hard to feel sorry for them, except maybe for owner Gerard who merely comes across as too stupid to be in charge of anything.

Normally in a film like this the perception gets changed into respect by the effort of the team to win the sports event, but in De Marathon another tactic is used. It shows that these assholes each lead such disturbed, uncomfortable private lives, that they need their workplace to survive and keep somewhat sane. It isn't so much the financial security of their jobs they're craving (although it's the excuse they all use and of course at least a partially true one), but the chance to escape into being assholes together for a few hours each day. It's the only relief they have.

This is where the film shines: the fact that it dares to dive dark and deep with its main characters. The story may be as humdrum as they come and you may be able to plot it blindly. Team of misfits banding together: check. Newfound mutual respect: check. Growth against all odds: check. Last-minute calamity preventing the event: check. Saved by the bell: check. Defeat in victory: check. Victory in defeat: check. And I haven't spoiled a single thing that the film's poster already hasn't spoiled all by itself.

But everyone on the team has a hidden second dimension, one they stop being able to hide from each other. One copes with a lethal disease, another has a wife who is deranged by grief over a lost baby. There's infidelity, loverboys, rampant discrimination and dementia eating away at these peoples' lives, and participating in a marathon does not take these problems away for them.

That the film is successful in getting us involved is because of strong acting of the main cast, especially Stefan de Walle as Gerard, who performs far better here than I ever had thought possible of him. De Walle got me close to crying a couple of times, he's that good in this role. Frank Lammers and Martin van Waardenberg (who is also one of the script's co-writers) are both known for being able to portray outrageous characters but here they need to do some more subtle work as well in several scenes, and are surprisingly good.

And director Diederick Koopal (primarily known for several adverts) doesn't drop the ball in his debut and focuses on the important stuff. On top of that, the film looks and sounds good as well.

Dutch films have a tendency to be unwatchable (if you're Dutch yourself) because of over-familiarity with the actors, clunky unrealistic dialogue, and an over-reliance on old jokes. Two sequences in De Marathon almost fall victim to this: a birthday party which seems to exist just to show how funny everyone is, and a stupid stunt halfway through which, if tried for real, would have landed the runners in jail instead of safely at home.

De Marathon works best when it "keeps things real," the dreary daily-life problems endearing you far more to its cast than any slapstick shenanigans ever will. Thankfully, De Marathon contains a lot of the good stuff and only a few stains of the bad stuff.

This is light fare but mostly very well done, the good points far outweighing the bad. Jarring moments are kept to a minimum and especially the main cast members dig into their roles with gusto, easily carrying the film. Expect a standard sports flick and chances are you'll be pleasantly surprised by the focus on characterization rather than achievement. Recommended!


De Marathon is now playing in theaters across The Netherlands..

Do you feel this content is inappropriate or infringes upon your rights? Click here to report it, or see our DMCA policy.
Diederick KoopalGerard MeuldijkMartin van WaardenbergStefan de WalleMarcel HensemaFrank LammersComedyDramaSport