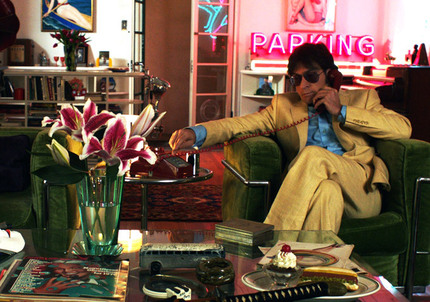 The other other filmmaking Coppola returns to the big screen for the first time since 2001 effort CQ when A Glimpse Inside The Mind Of Charles Swan III premieres at the Rome International Film Festival. Roman Coppola has kept himself busy in the meanwhile writing scripts with Wes Anderson, shooting second unit for his father and sister and directing stacks of music videos but his return to features is a welcome and anticipated one.

Charlie Sheen, Jason Schwartzman, Bill Murray, Katheryn Winnick, Patricia Arquette, Aubrey Plaza, and Mary Elizabeth Winstead star in what promises to be a very odd look into the life of the titular Swan.

Charles Swan III (Charlie Sheen) has it all. He's an eccentric and highly successful graphic designer whose fame, money and devilish charm have provided him with a seemingly perfect life. But when his true love, a perplexing beauty named Ivana, suddenly ends their relationship, Charles is left heartbroken. With the support of his loyal intimates-- Kirby (Jason Schwartzman), Saul (Bill Murray), and his sister, Izzy (Patricia Arquette) - he begins a delirious journey of self-reflection to try and come to terms with a life without Ivana. "A Glimpse Inside the Mind of Charles Swan III" is a unique relationship film told in a playful and unconventional style.

This freshly released image from the film makes one thing very clear: It's certainly not going to be drab.

Do you feel this content is inappropriate or infringes upon your rights? Click here to report it, or see our DMCA policy.
Roman CoppolaCharlie SheenJames ParadiseAnne BellamyJason SchwartzmanComedy