Review: A GLIMPSE INSIDE THE MIND OF CHARLES SWAN III Offers Only Fleeting Pleasures 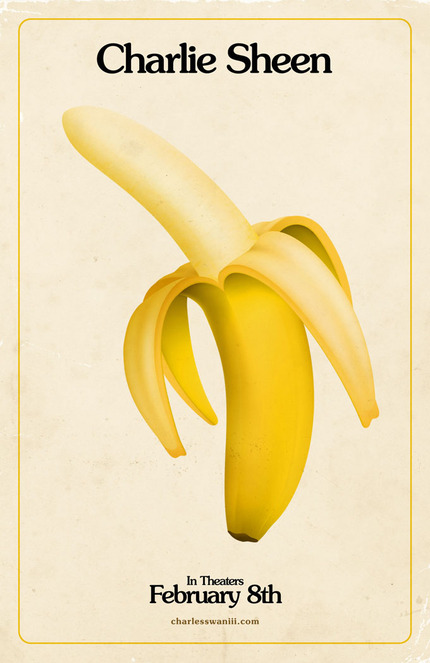 Any film with a title as obnoxious as A Glimpse Inside the Mind of Charles Swan III seems resolutely unconcerned with actually getting wide audience acceptance. I've watched the film, and even interviewed the director, and still have a hell of a time keeping the title straight.

That said, it does give you a sense of the film, a warped, manic, sometimes offensive and sometimes surprisingly effective tale of a resolute prick coming to terms with the breakup of his relationship with a younger, more attractive girl. The Swan in question is played by a real life Charlie, this being Charlie Sheen's first big-screen role since his infamous "winning" phase and very public meltdown.

The script and direction is handled by the Coppola scion Roman, whose last outing in the big chair was 2001's under-watched CQ. While his sister Sophia Coppola has seen a modicum of critical and box office success as a writer and director over the years, Roman Coppola has served as producer for several films, and co-written two in collaboration with Wes Anderson (The Darjeerling Limited and Moonrise Kingdom).

It would be easy to dismiss the revelry and sporadic nature of his newest effort as Andersonian, but I think that would miss its unique nature, as well as what makes Anderson's films so much more engaging. Here we get a shotgunning of bizarre vignettes barely connected by a filament of plot thread, smashing together preposterous slapstick elements with more somber, sometimes violent outbursts.

The film is apparently meant to make you feel, or,perhaps make you think about what you feel when you have a particularly shitty breakup. That said, it's not so hard to see why someone  would leave Mr. Swan; he's an obnoxious, childish, selfish fuck who seems not to be deserving of a good life. Putting aside the judgment, we're asked to go along for this zany ride. I fear, however, that not too many will want to stay aboard, even if we're trudging along in a pretty nifty vintage auto with bacon and egg decals on either side of the car.

Mixed in with all this madness is the fact that Swan works as a graphic pop artist, so we get to see a number of celebrated California-style images throughout the flick. It's a testament to Sheen's sideburns and the laid back West Coast style that it took about 45 minutes before I realized the film is actually meant to be situated in the past, rather than just having an assemblage of "vintage" elements used by the characters in a kind of hipster revelry.

At its worst, A Glimpse Inside the Mind of Charles Swan III is a tedious, haphazard mess, a big budget home movie. At its best, the film is an engaging, haphazard mess, a big budget home movie, complete with a cast clearly doing it for the love of the experience. In the final, delicious crane shot we see the genuine enthusiasm of the ragtag bunch that put the thing together, and it all makes it feel like part of some grand experiment in oddness.

A key component that elevates the film is the preponderance of tunes from Liam "Plush" Hayes. Forming a kind of Brian Wilson/Harry Nilsson/ELO vibe, it makes the sun-kissed locations and preposterous moments somehow more energizing. Coupled with Jason Schwartzman's magnificent Jew-fro, a la Art Garfunkel, and Bill Murray's always enjoyable melancholia, it's easy to see that a certain cultish fascination with the film may develop.

Still, one shouldn't be confused by these fleeting moments into concluding that it's a particularly memorable or interesting work. It's fun in moments, painful and tedious in others. It's hard to fault a film completely, though, when it's clearly done out of a sense of play, especially after the tour-de-force closing shot.

Anathema to a casual audience, fodder for those obsessed with the tabloid exploits of its lead, A Glimpse Inside the Mind of Charles Swan III takes a certain fortitude or masochism  to stick around for all these glances inside Charlie's mind. For those that stick with it, the reward is, at best, a pleasant, quirky, and likely forgettable experience.
The film opens in limited release in New York and Los Angeles on February 8. Check the official site for theater locations and more information.

A Glimpse Inside the Mind of Charles Swan III

Do you feel this content is inappropriate or infringes upon your rights? Click here to report it, or see our DMCA policy.
Charlie SheenJason SchwartzmanRoman CoppolaJames ParadiseAnne BellamyComedy