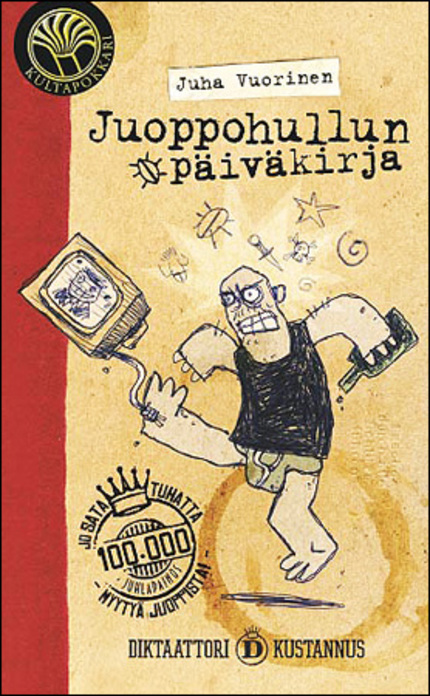 It may be tempting to consider Lauri Maijala's Gloriously Wasted something of a Finnish answer to the success of The Hangover. And I'm sure the timing of this film making it to the big screen certainly has something to do with the success of the American franchise but there's more to it than that. For one thing, this is an adaptation of a hugely popular - and pre-existing - series of books. And, for another, it does not appear that anyone in this film is ever sober long enough to be hung over.

Juha Berg (Joonas Saartamo) is a 30-year-old hopeless drunk in the Kallio neighborhood of Helsinki.

Juha doesn't have the first intention of changing his way of life - just the opposite. He really enjoys sundry sexual relationships, adrenalin-inducing violence and, of course, alcohol for which he gets money even if by collecting bottles. But the hilarity in a drunken haze soon gets a run for its money as the passionate Juha falls in love with his AA group leader. The relationship with Tiina (Krista Kosonen) progresses quickly to dating and Juha has to make pivotal decisions.

Juha has to begin balancing between maintaining a functional intimate relationship and his old lifestyle. Juha's best friend Kristian (Santtu Karvonen) does his best to sabotage the relationship, and Juha's shaky decision to stay sober is further hindered by Mikael (Johannes Holopainen), an expert on German erotica.

But how far can you go before there is only one solution left?

Gloriously Wasted is a comedy that breaks all the rules, based on the first part of Juha Vuorinen's immensely popular Gloriously Wasted series of books. The movie was directed and written for the screen by the highly successful theater director Lauri Maijala, and produced by Aleksi Bardy and Juha Vuorinen.

The first trailer for this has arrived and while it does not include subtitles, drunkenness is a universal language. Check it below.

Awesome. The Finns certainly like their drink. I don't think I've seen a Finnish film without some sort of alcoholic character or plot line.