DVD Review: GANGS OF WASSEYPUR Is An Epic Experience Hamstrung By A Half-Assed DVD 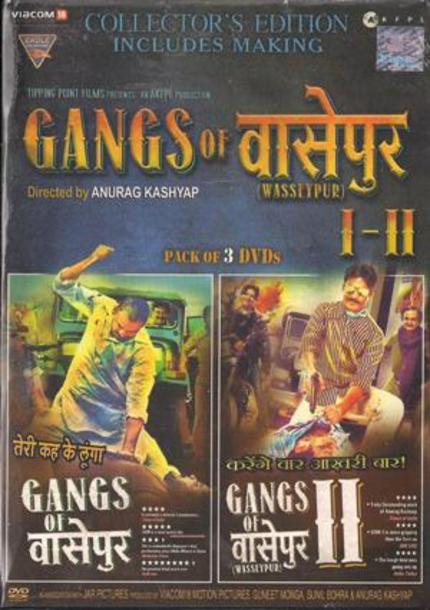 I'm only slightly bitter that I wasn't the first ScreenAnarchists to get his critical mitts on Anurag Kashyap's magnificently indulgent crime epic Gangs of Wasseypur, that honor belongs to Kurt Halfyard who saw it at TIFF. Thankfully, I can report that Kurt's take on the film mostly mirrors my own, and so reiterating his own points would be selfish on my part, so I'll try to keep it to a minimum. However, I do believe there are a few things that Kurt was perhaps not in a position to pull from the story that I'd like to touch upon. Before I get to that, I want to give Kurt his due and pull a few words from his review that really sum up my feelings about the film.

Let us get this out of the way first: Anurag Kashyap's generation-spanning story set in the coal capital of India and spanning almost 70 years comfortably, nay confidently, belongs alongside the great crime sagas of the cinema: The Godfather Trilogy, City of God, Bertolucci's 1900, Heimat and Election. The perfect nexus of history, craft, thematic heft, and balls-to-the-wall entertainment, it is why cinema was invented in the first place. It is HBOs Deadwood rogues gallery of character actors as much as it is the legacy scheming driven plot mechanics of I, Claudius. Rare is the opportunity of novel-style story telling and mighty cinematic craft to come together in such a marvelous package. It's a gift to film lovers...

Unfortunately for me, I haven't had the opportunity to see this monster on 35mm, but I can say that I agree with every word of Kurt's review, and those familiar with Indian popular culture will find themselves giggling with glee at the wonderful little drops throughout the film. Gangs of Wasseypur is more than a crime drama, it is a 5 hour encapsulation of the very volatile history of India since the British Raj was ousted in the '40s. Kashyap gives us an entry point into a world that many Indians know exists, but most try to steer clear of. He does it with unbridled panache and an impetuous zest that turns Gangs of Wasseypur from a simple film, to a masterful epic on the scale of those great crime stories Kurt mentioned, and he does so fearlessly.

The first that most people heard of Gangs of Wasseypur was when it was announced as being a part of the Cannes Film Festival's Director's Fortnight program. In fact, the film had been gestating for a couple of years, and when you see the film, that's very evident. Five hours of intense crime drama doesn't appear out of nowhere, and it is perhaps best that the film is approached without expectation, because whatever you think you're getting, you're not even close. I, on the other hand, was absolutely wracked with tension over finally seeing the film. I've been writing about it and bitching about its lack of international screens and distribution for months. It would've been very disappointing if I'd spent all of that energy whining and the film wasn't worth it.

As you can see from my comments above, the film is most definitely worth it, which actually makes it even more frustrating that it still has no North American distribution as of yet. Gangs of Wasseypur has been acquired for UK distribution, along with Mira Nair's The Reluctant Fundamentalist, by Mara Pictures and is supposed to get a cinema release in early 2013. Perhaps a five hour epic is a bit of a challenge, but if it is handled properly it could be a breakout hit. Remember John Woo's Red Cliff? This is better.

The expansive cast of characters, not a hero among them, is very impressive. Kashyap has managed to wrangle not only the best character actors in India in Manoj Bajpayee (Chittagong, Vedam) and Nawazuddin Siddiqui (Chittagong, Kahaani, Patang, Miss Lovely, Black Friday, Paan Singh Tomar, etc, etc.), but he's also got an outstanding cast of female performers in Richa Chadda, Reema Sen, and Huma Qureshi. Throw in one of India's leading independent directors, Tigmanshu Dhulia (Paan Singh Tomar), in the pivotal role of the villainous crime boss turned politician Ramadhir Singh, and you've got a very intimidating crowd on your hand. All of these actors do incredible work, especially those who are asked to portray characters who age up to 60 years over the course of the film. To call it an immense undertaking would be an egregious understatement.

I promised I wouldn't gush too much, and I really do recommend that you check out Kurt's review (linked below), so I'll move on to the meat of this column, the special edition DVD of Gangs of Wasseypur I & II.

Gangs of Wasseypur has its first English subtitled DVD release from Eagle Home Video in India. They released both films separately over the past few months, but it was only in the last 6 weeks that they finally put out the set of both films together with an additional disc of bonus material. This is the package I could feel coming and the version I knew I wanted.  I'd heard terrible things about the image and audio quality of the individual discs from people who owned them, but I was willing to put blinders on in order to see the damned movie. I'm glad to say that reports of its terrible quality are slightly exaggerated.

The image quality, while far from what you'd call "good", is certainly passable if your only interest is seeing the film. It is presented in anamorphic widescreen, and detail is pretty decent. The biggest issues with the image quality are (a) the contrast scale is pretty screwed up, and (b) there are several shots that don't appear to have the final color grading applied, leaving them to stick out like sore thumbs in the big picture. The result is a pretty faded looking image with not nearly enough contrast and random scenes that look as though they were presented from an unfinished version of the film. Irritating, but not the worst I've ever seen. Still, when you look at the asking price, it's not abortive. If/when I have another better option, I'll most definitely upgrade, but for the time being, it could be worse.

Thankfully, the audio fares much better. Gangs of Wasseypur is a film that relies heavily on the surround sound field both for immersive action and its amazing background score. The numerous gun battles will leave you dodging left and right as bullets whiz by your head. The score, well, it is flat out amazing. Many of the non-Indian critics have taken the lazy path of trying to describe how far from Bollywood Gangs of Wasseypur is, but it really isn't at all. It is a five hour action crime drama with twenty five musical numbers, doesn't really get much more Bollywood than that. Sneha Khanwalkar, the composer for the film, is one of very few females working in Indian films, and her songs are fucking AMAZING. I've been rocking out to this soundtrack for months already, and the songs sound even better when spread out among the 5.1 channels on my home theater. Unreal stuff. If this doesn't get recognized during awards season, it'll be a goddamned travesty.

If anything, the absolute worst part of these disc is the terrible quality of the subtitles, many of which appear to be translated literally from the Hindi script. After years of watching Hindi films, I'm able to pick out dialogue here and there, and the words appearing at the bottom of my screen were frequently far from the spoken dialogue. In addition to that, Hindi syntax is far different from English or any other western language, so it would've helped to have had a second set of eyes on these subs to make sure they make sense, which they frequently don't. You'll get the idea, but you'll also probably giggle at these comically bad subs from time to time.

The major advantage of purchasing this three disc set as opposed to the individual films on DVD is the third disc which includes a 95 minute making of documentary. Unfortunately, but not surprisingly, the documentary doesn't have English subs, but the documentary is still very interesting for the mountain of behind the scenes footage and interviews, which are often conducted in Hinglish, the seamless mix of Hindi and English that has become very common in northern India these days. I especially enjoyed the segments with Sneha Khanwalkar putting together the soundtrack, they are really engaging, and she is a firecracker.

So that's it. Gangs of Wasseypur is on DVD. It isn't perfect, far from it, but it also is the best we've got with English subtitles so far. In a couple of weeks France's Blaq Out will be releasing Part 1 in Hindi with only French subs, and that is probably going to have better image quality (it wouldn't be hard), but without English subs, it's a no-go for most of us. Our best hope at the moment is probably to wait and see what Mara Pictures does, though a Blu-ray (pleasepleaseplease) from a brand new distributor is probably too much to ask. Someone in the US needs to get their hands on this and do right by it. If I had a company, I'd be all up in it. Come on indie pals, let's make this happen!

In the meantime, the three disc set is relatively inexpensive at Movie Time Video via the link below. Get on it.