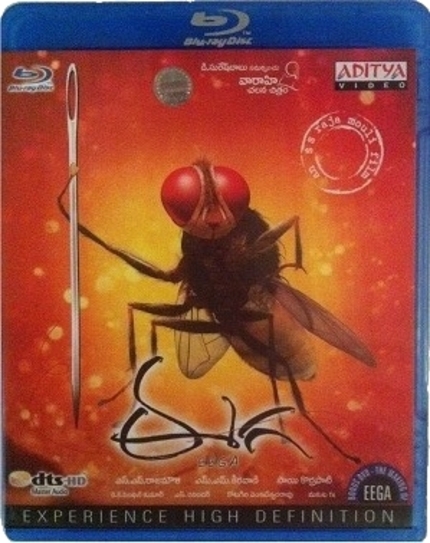 I've made no secret of my love for SS Rajamouli's Eega. Back in July I called it the best film of the year, and now, halfway though November, I don't feel any differently. The film was recently released on Blu-ray, and I wanted to let the world know that it was now available. Is it a good representation of what I saw on the cinema screen? Well not exactly.

However, before we get into my complaining, here's a little snippet of my original review from July:

There is a reason that S.S. Rajamouli is considered the most innovative director in the Telugu film industry, and Eega is the perfect illustration of why he deserves to wear that crown. The film is completely insane, endlessly enjoyable, and absolutely unique. Eega is the best film about a man reincarnated as a housefly avenging his own murder that you will ever see. It isn't easy to find, but I highly recommend looking through the list of theaters linked below for a screening near you, you'll come out of the auditorium a changed person....

Every time I thought I had a handle on Eega, it threw me for a loop in the best possible way. Eega is easily the most flat-out entertaining film I've seen this year, bar none, and I didn't understand more than half a dozen words of dialogue in the whole thing. It's that good. It's often said that the best filmmakers know how to show, not tell their stories, and if that's the criterion for master filmmakers, S.S. Rajamouli is someone you need to know about. Incredible action sequences, inventive storytelling, technical excellence, and laughs and gasps that just keep coming; Eega has it all.

I stand by those words, and the rest of the review, 100%. Having watched the film a total of three and a half times now, it remains far and away the most exciting film I've seen in 2012. As such, I was eagerly awaiting the eventual home video release of the film so that I could relive the experience, this time with the assistance of the subtitles I was not given theatrically.

Being the purist I am, I wanted to be sure to get the original Telugu language version of the film on Blu-ray. The film was released theatrically in four different languages: in Telugu as Eega, in Tamil as Naan Ee, in Malayalam as Eecha, and very recently in Hindi as Makkhi. The regular release pattern in India is for each region to release their own dubbed version of the film both theatrically and on home video, so I was willing to wait for the Telugu version if need be. Thankfully, I didn't need to wait too long as the film appeared first on Telugu Blu-ray and has yet to appear in HD in any other language. There is a Tamil DVD version, and an upcoming Malayalam Blu-ray, but this was the one I wanted. Well, I've got it, for better or for worse.

Eega comes to us on Blu-ray from Aditya Music, who apparently won a pretty hot and heavy bidding war for the home video rights to the film in Telugu. Unfortunately the product they delivered is well below what should be an established bar for quality in HD home video. Eega is extremely heavy on CGI, and while the clarity and sharpness are largely very good on the disc, there are several fatal flaws that should've been corrected if possible. The most egregious mangling of the film comes in the form of a severely fucked contrast scale, which leads to absurdly crushed black levels rendering nearly all shadow detail completely obliterated. I'm not the world's greatest videophile, but I know when something is wrong, and there is definitely something wrong with the video on this disc. In addition to the black crush, there are various scenes in which the color balance is noticeably off, with skin tones falling toward the red end of the spectrum, and natural tones taking on a brownish hue. Really ugly. Last, but certainly not least, is the destruction of the final reel of the film in which the entire finale is about two stops too dark, something that should've been easily correctable. One positive note: THERE ARE ENGLISH SUBTITLES.

Is image clearly HD? Yeah, sure it is. The detail is fine, and the CG looks great, but the colors and contrast are so far out of whack that it's hard to recommend this disc to anyone, as much as I want everyone to see it. The audio is another story entirely, the DTS-HD MA 5.1 surround track is a thing of beauty, giving good separation and a booming low end that puts you in the middle of the Eega action in a way that even my theatrical experience couldn't do. NO complaints about the audio, but man, the video is a mess.

Also included with this Blu-ray is a bonus DVD featuring about two hours of behind the scenes material, which is fascinating even though there are no subtitles for it. We get a very good look at director/creator SS Rajamouli at work and the kind of hands on director he really is. Watching two hours of unsubbed behind the scenes stuff can be a bit of a chore, but break it up into a few pieces and you might really enjoy it.

It's only right that I let you all know that this disc is far from ideal. However, it will be the only Blu-ray release for the film in its original language, so that is something to consider. In the next few weeks we are expecting a Malayalam Blu-ray edition of the film which will look better, but probably not nearly as good as the film deserves. The man in charge of authoring the Malayalam disc is Shahran Sunny Audit, and he's responsible for some of India's finest HD work with Ayngaran. He has this to say about the master materials from the producers:

We created the first test disc. While the quality of the encode is excellent, we are having trouble with the blacks and contrast levels. Looks like whoever worked on the original DPX color correction (in post production) messed it up big time!!

They crushed the blacks to make the CGI blend in more with the film.

Now I understand why the Telugu blu-ray version has "BLACK LEVELS" problems - its all down to the poor DPX colors which the director approved!!

Also the original DPX has high levels of DNVR levels. It seems the 35mm film had developed much wear and tear during principle photography. The post production studio who worked on the final mastering applied DNR to remove the wear and tear. All skin details and film grain were wiped out.

The overall DPX file of EECHA/EEGA/NAAN-EE is a mess and is taking our time to sort it out.

We'll do our best to improve the quality...

That was a couple of weeks ago, and he hasn't given up much promising information since then. It'll be better, but not great, which is sad.

You need to see this film. You've never seen anything like this film. This Blu-ray isn't an abomination, but when I think of all the complete shit that gets sparkling HD treatments, it makes me ill that we couldn't get the same for this gem. Purchase link is below, you can buy the Blu-ray or the inferior DVD, but whatever you do, don't miss this film!