Rachel Fox
Contributing Writer; Vancouver
Sign-In to Vote
Tweet Post Submit
The Tragically Hip are the biggest Canadian band that - for those who live beyond the great white north's borders - you have probably never heard of.

Currently riding their third decade of domestic domination, The Hip (as they are commonly known) are bigger than Rush, Nickleback, and the Bachmann Turner Overdrive combined. If Celine Dion, Shania Twain, Alanis Morissette and Avril Lavigne formed a supergroup, they'd have nothing on The Hip. (They might open for them, maybe.) In Canada, these guys are bigger than Bieber,

Named after a tiny town in Ontario, The Hip's song "Bobcaygeon" (off their sixth album, 1999's Phantom Power)  exists as one of the band's most beloved of tracks. So, naturally, The Tragically Hip staged a concert there. In a farmer's field. For 25,0000 die-hard fans.

The morning after the film's premier at the Vancouver International Film Festival, I am sitting across from director Andy Keen, whose captured the event in the new documentary Bobcaygeon. Despite their hold on Canadian pop culture and my having seen them perform twice, I would not really consider myself a "fan." Naturally, I have to ask Andy where he falls on The Hip Fan Scale. "I have always been a Hip fan," he confesses. "But I'm a changed fan. Now, I'm a Super Fan," he says.

How did this film fall into your lap? 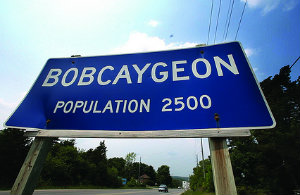 I made a film with Sarah Harmer in 2006 (Escarpment Blues) on her environmentally-driven tour. I went with her to archive it, but in the end we made a film out of it. We won the Juno and it did really well.

Gord (Downie, lead singer of The Hip) is a friend and fan of Sarah's. He saw the film and liked it, years ago now. When this concert in the town of Bobcaygeon came about, they bounced around the idea of a concert film and my name was put in the hat. The first meeting with Gord was at the beginning of May 2011, the show was June 25.

There was a lot to do, a lot to put in motion. All in, it [pre-production] was six weeks.

This concert film has a very strong story component - the town, the fans, etc.

When we wrote the treatment, we knew we didn't have a lot of time so the structure was four threads: The town, the band, the fans, and then the show. The concert is the climax. What we see on screen looks a lot like what was on paper.

We interviewed a ton of fans, but they didn't all make the film. This film something the band knew they wanted to do; they didn't want to do a straight-up concert film. I think it's a little different than your typical "rock doc."

I don't have any Hip on my iPod but I know the words to many of their songs. You can't live in Canada and not, in some way, be under the spell of The Hip. They're a part of the Canadian national identity, and have been for decades. But the curious thing is how they've never conquered the world - like, say, a band like Rush - the same way they have dominated domestically here in Canada. Why is that? 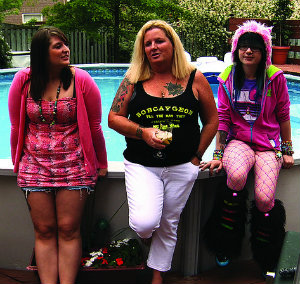 I don't think there is an answer. A lot of people wonder why, because people here are so passionate about them. We had stories of people playing The Hip for their friends in the States, who would later get into them and then ask the same question! It doesn't all add up in a way.

Let's face it: There's some mysterious equation or role of the dice, something that happens to bands that break down there. That's the market we're talking about - obviously there's Europe, but the big one is the States.

We asked most people for their two bits on this and most people have their own answers. Collectively, it was that, 'Americans don't get it. They don't know what these songs are about.' And then they always like to turn it back on themselves, saying 'We like to keep them [The Hip] as our own.' That's the fans, of course.

I don't know if they [the band] ever said to their management, 'Hey, can we give it a harder push down there?'

I've seen them twice, and each time when they hit the stage it felt like Live Aid or something. I remember this distinct rush, a wave of people moving such that I have never seen at any other concert. Hip shows are intense. Their fans are rabid.

Yeah. They [the fans] like their beer. We saw that! They actually do sell more beer than anybody else.

I asked someone what, if any, token she thought Hip fans might toss onstage during a show. She answered, "mud." Because yeah, their fans really pulverize the ground! What is it about them that gets their fans so excited?

Someone said to me today that they couldn't believe how young the fans look. It's amazing that there are still 20 year-old kids at the front, crowd-surfing. What is it about The Hip? I don't know. I think these songs are anthems now. People know them.

Gavin Brown, the producer of their new album [Now For Plan A], talks about this in the film: There's a religious effect. Everyone has a Hip story. It's on another level and everyone can relate to it, so the show is like a massive family who all know why they're there. It's a collective thing.
Maybe there is something to that.

As Canadians, a wildly reserved nation of people, there are very few things that bring us together and unite us in some way: The Hip, hockey, and a national love of donuts.

Fair enough. We meet the band, casually, in this film. But they're not an enormous component of it. That Gord Downie fellow, though - he's such a character. He's so charismatic, so expressive. I loved watching him perform. 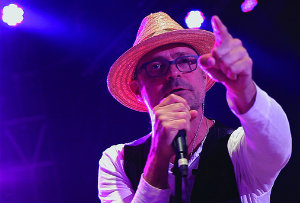 He goes through this change, right?

One of my favorite parts of the film is when we see them on the bus, before the show, preparing. It's incredible that after so many years these guys are still anxious. Gord Sinclair [bassist] has the deep breaths going, he's kinda bent over, you can feel it. But Downie...

He doesn't do a lot of interviews, but of the ones he does you can learn about him from how he answers questions. He's a shy person. He's very serious about what he does. He goes through this thing; he amps up. he changes. 'Now it's show time!' He puts on his dancing shoes and, David Byrne-style, he feels that music. He feeds off the fans.

I don't know that you'd get that type of performance out of a guy if there weren't a bunch of fans going bananas in front of him.

He has an incredible charisma that's hard to articulate. He kind of reminds me of an old man marionette...

He's got the hat, he's unshaven, and he wears the suit. He has a look. He is like a puppet, though. He's an interpretive dancer. He's got some moves.

Did you screen this for the band? What did Gord Downie say when he saw this?

He didn't comment on his moves. [Laughs] I was somewhat honored that he gave such a great performance at that show. I mean, he always does, but this film has especially beautiful Downie moves.

We screened it for the band at the Lux Theatre in Toronto. They each came to me independently and all had really nice things to say about it.

I've worked with lots of bands before, doing music videos, and they can be picky or vain about how they're portrayed. These guys? They weren't that way. They had some great laughs from the fans and their stories [of interacting with the band], which a lot of them  remembered. But their big takeaway was, 'Wow, that show was rockin'!' They were pumped. They were like, 'Yeah, we still got it.'

This is a bit meta, but it must be asked - have you screened this film that is named after a song named after a town - in Bobcaygeon?

No. But I am sure it will happen. In fact, one of the guys we met up there emailed me last night, saying 'I hope it went well at the premier last night in Vancouver. How about we bring it to town?'

We will definitely return to the scene. I think we should do a big projection. In a farmer's field.

Do you feel this content is inappropriate or infringes upon your rights? Click here to report it, or see our DMCA policy.
Andy KeenBobby BakerGord DownieJohnny FayPaul LangloisDocumentaryMusic