Review: THE OTHER DREAM TEAM Dribbles Out of Bounds 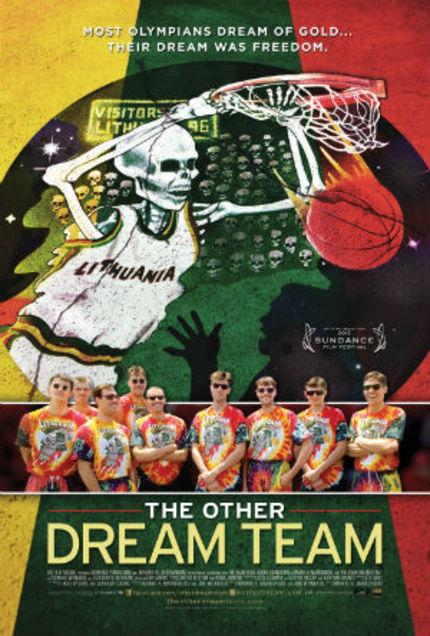 Presenting an unfiltered view of Lithuanian oppression under communist rule, the new historic sports documentary The Other Dream Team might just be the most condemning movie depiction of the Soviet regime since Red Dawn.
If that sounds heavy, never fear, we're actually dealing with a documentary about a basketball team (the 1992 Lithuanian Olympic team, to be exact) that ascends to unlikely glory. They are depicted as admirably proud of their country, never wanting the "Soviet Union" branding that they were so often shackled with. A lot of the players hailed from the same small geographic area, not unlike the U.S. 1950 Olympic soccer team that was made up multiple players from the Italian "Hill" area in St. Louis, Missouri.

There are numerous interesting factoids like that one, and even a few genuinely compelling aspects of the story, but director Marius A. Markevicius (long-time producer, first-time director) lacks the confidence to stay in one place (or time) for any solid stretch. The film cuts haphazardly through the chronology, bouncing around between new "talking head" style interviews with key players and sports commentators today, and the team history, circa late 70s onward. I confess to getting so frustrated with The Other Dream Team, I had to turn it off and get back to it later. (Yes, I am reviewing a screener disc. When you go see it in the theater, you won't have this luxury. As a critic, I make of point of trying to review screeners beginning to end, replicating the theatrical experience as best I can. But this one momentarily defeated me.)

The Other Dream Team tries to prop up the importance of the fate of the basketball team by cross-cutting its stories and interviews with broader "real world" archival news footage of Lithuanian suffering, mass-oppression and wrenching human tragedy. It's supposed to underscore the importance and eventual significance of the other Dream Team, but it backfires. The weight of the broader footage, being SO disturbing and major, makes the unintended consequence of the basketball story feel like desperate fluff -- as if their story only matters because it's all this poor oppressed country has gong for it.

Instead of simply letting this story play out as a more intimate rags to riches (or more apropos, nothing to greatness) sports story -- allowing it to be something truly about the hopes and dreams of these basketball players, realized or not -- it insists on laying a sprawling canvas of world events over everything, an attempt that fails.

Confounding these issues is the fact that The Other Dream Team is clunky, an attribute that is never good in film, particularly one about a basketball team. It's uneven in use of music, transitions, and overall directorial tone; messy and at times even amateurish. The film is yet another regrettable example of a documentary in which they got the interviews with most of the key players (and then some -- do we really need to hear from broadcaster Jim Lampley?) but fail to appropriately use them. It's like striking gold only to spend it on a wet mud hut.

Beyond the sports/historical aspect, the big obvious appeal of this doc is the Grateful Dead connection, which is a heavily touted point of interest in the film's promotional campaign. In reality, it's an important but still footnote-worthy relationship, as the band basically used its clout and vast fan base to raise some money for the team when they really needed it. They also gave the players some nifty tie-dye t-shirts, which they wore to their Olympic medal ceremony (spoiler alert). One famous Dead tune plays for a few seconds over an opening title graphic, leaving one to wonder why the heck they bothered. That is, until just over an hour into the 91-minute film, when the band's role comes into play.
Considering the sloppy juggling of chronology throughout the film, saving the Dead for a late-game three-point shot proves not only to be weirdly inconsistent, but simply another example of the film's all-over-the-court bad storytelling.
(The Other Dream Team is now playing in limited theatrical release in selected U.S. cities. Check the official site for theater listings.)

The Other Dream Team

Do you feel this content is inappropriate or infringes upon your rights? Click here to report it, or see our DMCA policy.
Marius A. MarkeviciusJon WeinbachJim LampleyBill WaltonGreg SpeirsMickey HartDocumentarySport

More about The Other Dream Team