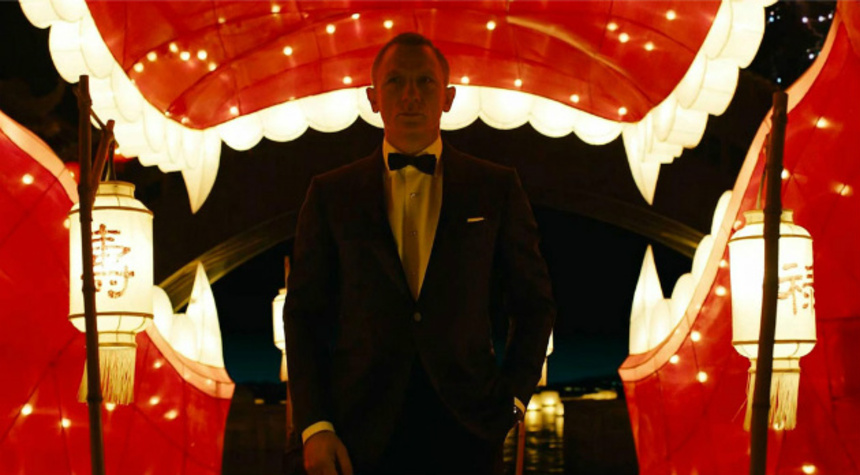 Skyfall, like the previous entries in the rebooted Bond series, takes great pains to correct a myth perpetuated by the classics with Sean Connery and Roger Moore. To wit: You do not actually want to be James Bond. Being James Bond is hard. It is painful. It is exhausting. And it drives you to drink. Fortunately, unlike Casino Royale, which advanced this thesis with joyless, groin-hitting force, director Sam Mendes remembers that even if we don't necessarily want to fill Bond's shoes, there's still a hell of a lot of fun to be had watching him.

Indeed, for all the spectacular action set-pieces in the film - and there are some real jaw-droppers - perhaps the most impressive stunt that Mendes pulls off is the tonal tightrope the film walks. It keeps the harder-edged, conflicted character that Craig introduced five years ago without sacrificing the sense of fun and even nostalgia that makes the classic films so compulsively watchable. Yes, it is dark, serious, thrilling and surprisingly character-driven. At the same time, it's grimly funny, sexy, nostalgic and, on occasion, ridiculous.

As the film begins, even Bond isn't crazy about who he is, though it takes a botched-mission in Istanbul that ends with him getting accidentally shot by another agent (at M's orders no less!) for this realization to really dawn on him. This sequence itself is a dizzying testament to Mendes' ability to handle action scenes. In less than ten minutes, he plunges the viewers in the middle of a perilous situation, reveals just enough about the stakes to make us care, then proceeds to cram in about six different chases and a myriad of amazing stunts, each one somehow topping the last. Despite the excess here, the direction is clean and coherent, allowing the audience to not only follow all of the action, but to feel every frenzied beat of suspense and wonder. As a bonus, Mendes does far more with Istanbul's crowded, vibrant streets in this single scene than Taken 2 managed during its entire running time.

So Bond gets shot and falls into a river. He's presumed dead. Even worse, the list of secret service agents embedded in terrorist cells around the world has been stolen and whoever has it seems hell bent on performing an elaborate character assassination on M, sometimes by releasing names from the list, and sometimes by simply blowing up a huge chunk of the MI6 building. Meanwhile, Bond is (spoiler) actually not dead, but rather living the soft life on some island, drinking beers and making love to beautiful women. But once he sees that MI6 building in flames on the news, vacation-time is over.

Spoiler-phobic readers can rest easy -- We're barely 25 minutes into the nearly two and a half hour movie right now. Suffice to say, Bond gets on the case and is quickly whisked away to exotic locations with dazzling set-pieces, pretty ladies and some choice one-liners. Despite these welcome clichés, Mendes brings a lot to the table. First of all, with Coen Brothers regular Roger Deakins directing photography, the world of James Bond has never looked this vivid or exquisite. More importantly though, Mendes is more interested in the characters and their potential than any previous entry in the series. Bond's ambivalence towards his work, as well as the fact that he became rusty with a gun and a bit psychologically off-balance during his sabbatical make him a far more relatable hero with depth that demands more exploration from future films.

But it's not just Bond's show this time around. Judy Dench finally plays a a much more conflicted version of M,  one which actually merits her considerable acting skills. Ben Wishaw brings a cool, down-to-earth confidence to Q and Naomie Harris is responsible for some of the sexiest verbal foreplay ever put to screen in a Bond film. And then, there's Javier Bardem, sporting yet another completely ridiculous hair style. His predictably maniac performance sometimes borders on scenery-chewing, which may have marred the film if he weren't so much fun to watch. His performance is simultaneously ruthless and hilarious, and his bizarre quirks help sustain a sense of unpredictablitly and menace. This is especially crucial to the success of the film since, when his true motivations and history are finally revealed, they're pretty thin.

Still, the film isn't without flaws. There are a few baffling jumps in the plot, which I normally wouldn't mention in a review of a Bond movie, except that the movie is so assured most of the time that they are difficult to ignore. There are also a few thematic threads that Mendes inexplicably hammers home over and over again even though they weren't terribly profound or important in the first place.

Also, the film loses a bit of its momentum in the third act. Here, rather than trying to up the sense of spectacle to an even higher degree, Mendes opts for a much more intimate, personal and character-driven climax. It's an admirably bold choice, and there are certainly a number of pleasures to be found in this portion, but it feels like a bit too much of a comedown after the adrenaline-fueled action sequences that preceded it. It aims to capitalize on the character development from the first half, but the suspense and action here depends on only the most shallow aspects of the characters, which makes it difficult to invest as much in the action.

That said, the ending has a few surprises up its sleeve, and it's not a total misfire. Moreover, Skyfall does a better job than any previous Bond film of combining the conflicted sensibility of Fleming's original character with the cinematic spectacle we've come to expect from these films. As a bonus, it also contains some of the most-exciting, best-directed action sequences you'll find in any Bond film, or any film this year for that matter.

Shameless plug, but have my own write up here: http://bit.ly/Vz2wZ6. I think it was really important that with Casino Royale they completely distanced Bond from the gimmicks and gadgets and just simplified it down, now it was time to edge it back in in the way the The Dark Knight can get away with otherworldly inventions and gadgets, Naomie Harris underperformed for me, just felt very underplayed where she could have pushed for more chemistry with Bond, especially as she is destined to develop such a massive crush on the man. Thought it was a great film, potential to be a masterpiece but still can be considered the best ever Bond.

I am definitely seeing this movie in IMAX. "Skyfall" has been specially formatted for IMAX theaters, showing over 20% more image on the top and bottom, making the picture more immersive.

Bond without cool gadgets and gorgeous gBond girls are NOT Bond movie, Just a regular action movie, just like this one.