Rachel Fox
Contributing Writer; Vancouver
Sign-In to Vote
Tweet Post Submit
All right, let's get straight to the biscuits: World War Two. The Nazis are making their mark on Europe. Adolf Hitler wants to take the world. And keep it. All for himself.

Hitler's days are numbered because Danger 5 are on the case, scouring the furthest corners of the globe to unravel Hitler's most sinister plans...

Danger 5 is an Australian television series that premiered on the SBS One network in February, 2012. It's a weirdly hilarious, uchronic pastiche that seamlessly blends the stylized pulp of 1960s action serials (Star Trek, The Thunderbirds) with the kind of alternate-reality, absurd yet historically-inflected humor put forward to great effect in the web series Yacht Rock (except instead of the tyrannical John Oates, Danger 5 employs Adolf Hitler). 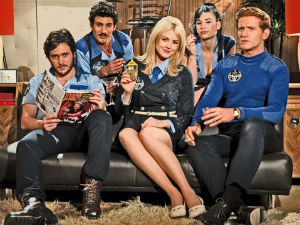 The show follows the exploits and adventures of elite Allied squad known as Danger 5, who are tasked with "killing Hitler." In every episode.

The visuals and overall tone in Danger 5 is a ridiculous cocktail of anachronism and homage to the 1960s that is as much subversive commentary as anything else. When de-facto squad leader curtly barks "Shut up, girl!" at British spy Claire whenever she dares correct him out of turn, you can't take it too seriously, in part because Colonel Chestrbidge has a giant eagle pinata for a head.

The brains behind this odd bit of of the creators behind Italian Spiderman, Dario Russo and David Ashby (who also stars here as American spy Jackson) have effectively created a bizarre referential comedy for smart people. After watching five straight episodes (including "I Danced for Hitler" and "Lizard Soldiers of the Third Reich") at Fantastic Fest I was overcome with a desire to email every 20th century history professor I ever had, begging them to seek Danger 5 out because i was certain it would blow their minds, rock their worlds, and change their lives. From the swinging music to the actor's crisp accents that appear overdubbed and slightly out of sync, Danger 5 is practically pitch-perfect in every way.

Danger 5 probably isn't for everyone. If you can't tell your Goebbels from your Göring or your Heydrich from your Himmler, you may miss out on some of the more nuanced humor. But really, what's not to love a claymation triceratops outfitted with a swastika shooting up a Belgian town with machine guns?