TIFF 2012 Review: SPRING BREAKERS Is Some Kind Of Wild 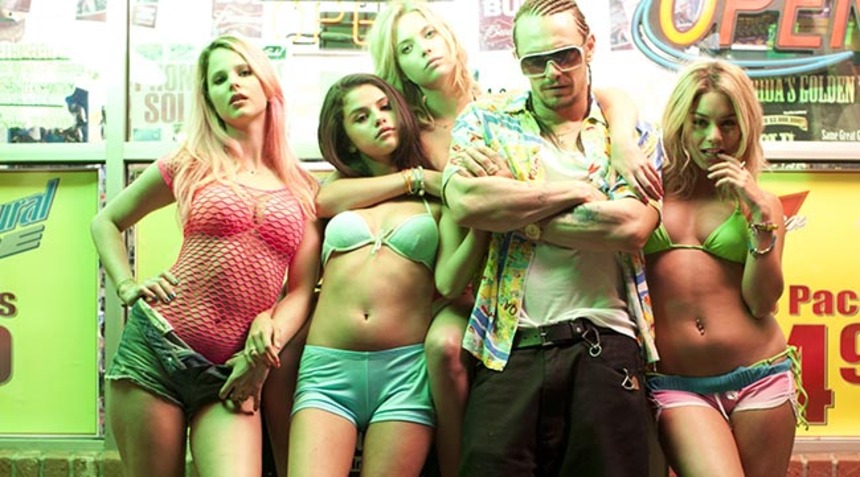 From the very first scene of bouncing breasts, bikini bottoms, and beer bongs on the beach, it's pretty clear that Spring Breakers isn't your typical teen pop vehicle. What else would you expect from director Harmony Korine, writer of Larry Clark's landmark 1995 film Kids. But where Kids was hailed for its harshly realistic depiction of that day's youth, Spring Breakers is pure fantasy. In Korine's fantasy land, young girls (like barely 18 young) wear nothing but tiny bikinis (often less), are always down to get down (even with each other), and are fueled by the thrill of the violent end of a high caliber assault rifle. This is the ultimate bad girl wet dream joyride - and damn if it's not a hell of a ride.

A smash cut from the beach party B-roll to a buttoned up college campus begins a first act full of contrasts. Our devoutly Christian heroine Faith (Selena Gomez, looking barely 15) is planning a spring break getaway with her party animal friends Candy (Vanessa Hudgens), Brit (Ashley Benson), and Cotty (Rachel Korine). But no matter how much Faith whines about wanting to leave their town, the girls don't have enough money. So the bad girl faction dons masks, steals a car, and robs a diner in a particularly stylishly-executed scene. With the money problem taken care of, it's off to Florida to get really wild.

The girls go about their hedonistic endeavors with wild abandon. Even the straight-laced Faith gets in on the fun. Plot is eschewed for visual pleasure for a solid portion of the movie, and there is certainly plenty to look at. But when the law rears its blue-capped head, the girls' fun comes to an abrupt halt. Luckily for them, salvation appears in the form of a silver-grilled rapper-slash-kingpin named Alien (played brilliantly by a corn-rowed James Franco). If you thought the girls were having a fun time before, just wait to see the havoc they can wreak with the unlimited funds and firearms of a fearless crime lord at their side.

While the scenes before us are completely ridiculous, they're actually played pretty straight-laced. At times you might even wonder if you should be laughing. It isn't exactly a satire, just a wild fantasy. That's not to say it isn't without its flaws. Much of the stylistic motifs are heavy-handed, like the constant repetition of lines and even visuals. The fact our main character is nowhere to be found for a good portion of the film, while obviously metaphorical, is also an odd decision. But these choices, drastic as they are, ultimately work and add much to the film's potential to be remarkably memorable.

It's hard to imagine the level of trust that the financiers of Spring Breakers must have had in Harmony Korine. In lesser hands, this could have ended up a drab morality tale or a wacky mess. Instead we have a raw and randy, yet also rather mature (in more ways than one) piece of cinema that's probably unlike anything you've seen before. One final note of praise for the gorgeous visuals shot by DP Benoît Debie - it's no coincidence that the this film reminds just a tiny bit at times of one of his other films, Gasper Noe's Enter the Void.

Do you feel this content is inappropriate or infringes upon your rights? Click here to report it, or see our DMCA policy.
Harmony KorineJames FrancoSelena GomezVanessa HudgensAshley BensonCrimeDrama