TIFF 2012 Review: GANGS OF WASSEYPUR is the Epic Crime Saga of the Year 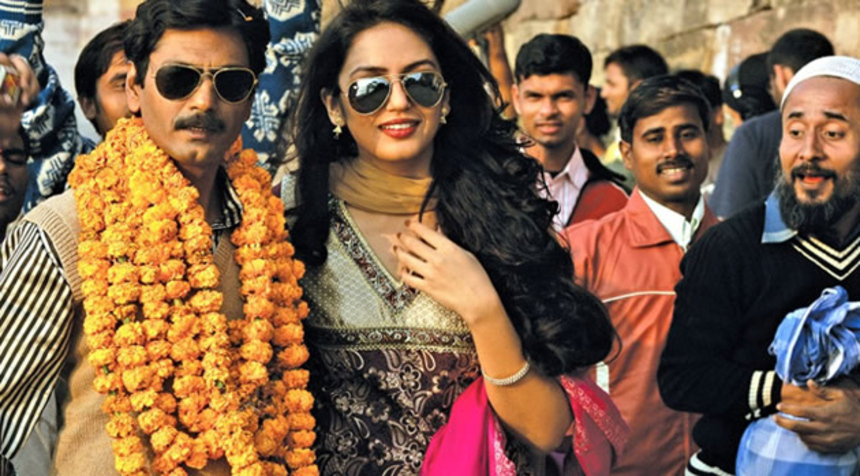 Pulling back, deliberately and slowly, from a soap-opera musical on the TV (involving, of all things, character introductions), the 315-minute long Gangs of Wasseypur kicks off with a single shot, Johnnie To-style unbroken assault on the stronghold of Faizal Khan with automatic weapons, grenades and narrow alleyways. It's the bright hearald of a major film career just leaping onto the international stage.

Let us get this out of the way first: Anurag Kashyap's generation-spanning story set in the coal capital of India and spanning almost 70 years comfortably, nay confidently, belongs alongside the great crime sagas of the cinema: The Godfather Trilogy, City of God, Bertolucci's 1900, Heimat and Election. The perfect nexus of history, craft, thematic heft, and balls-to-the-wall entertainment, it is why cinema was invented in the first place. It is HBOs Deadwood rogues gallery of character actors as much as it is the legacy scheming driven plot mechanics of I, Claudius. Rare is the opportunity of novel-style story telling and mighty cinematic craft to come together in such a marvelous package. It's a gift to film lovers.

Shown into two parts, each one well past the 2.5 hour mark, but conceived as a single film, it, in the director's words, shows "frogs in a well," 200,000 people spread across three streets. The rough and impoverished criminals are unwilling to leave or even look beyond the small neighborhood and spray as much blood as possible for ownership of its organized crime opportunities, which are equally transient.
Wasseypur may change hands geographically (India to Bengal), ethnically, even religious borders are mobile, but the Khans and the Singhs have been at each other's throats since the dawn of the coal era, where two patriarchs fought over the rights to hijack coal trains. When Ramadhir Singh kills Shiva Khan in this conflict, the Khan's young child Sadar shaves his head and vows to destroy Singh, not by murder, but my unravelling his empire piece by piece.

As Singh enters politics to cement his empire, Sadar collects a growing number of wives, fathers and several sons, and kills a lot of folks with a machete. The law stays out of Wasseypur for fear of escalating slaughter, and a fair bit of carrot-stick mechanics from Singh. Part one of the diptych has an almost documentary feel; it even weaves a hefty amount of documentary footage to establish the context of the era spanning the 1940s up until the 1980s. Popular music from the cinema and TV act as a Greek chorus to the proceedings, but begin to establish a theme that will pay off in the second part: Namely, the second generation of gangsters are so influenced by what is thrown up on screen that it leads an elder Singh to offer, "Everyon has his own movie playing inside his head, it it were not for the damn movies there would be no fools in this country." This, as the film slowly moves out of history lesson mode and into Scorcese mode.

One advisor, Nasir (think Robert Duvall or Derek Jacobi), narrates the film Goodfellas-style as the crime moves from the coal industry to owning the fisheries, to unabashed extortion, to eventually the burgeoning Iron business. If it is hard to keep track of the characters in the first 90 minutes of the film, they've all been immortalized after that point with impeccable attention in narrative craft establishing relationships and motivations and territory.
All of this set-up pays off in spades in the second part, when the film is left with a significant power vacuum, with many sons and daughters (and ex-wives) vying for their slice of Wasseypur. We catch back up to the opening scene about halfway through part two with the scene  -- again an apparently unbroken shot, though I was informed that there are two very well-hidden cuts -- but from a different character's point of view. Not only that, we have four hours of context to that scene now, and yet there is still a whole other 'film' in front of us.

With the visual (and musical) panache of Quentin Tarantino, the film continues to escalate to a frenzy of Machiavellian scheming and gore (think the best of Breaking Bad's showmanship and then go a little further), yet never losing sight of its main character, Faizal Khan, the unlikeliest Don of Wassypur. Living as a druggie, aging fast from from his youth, and darkening his skin, while his brothers fought for their perceived birthrights of power, Faizal doesn't even lose his virginity until he is well into his 30s, but when the age of knives are over, and it is guns, cellphones and the internet, Faizal is literally baptized in a spray of blood from a duplicitous friend.

He goes on to consolidate an empire with his fiery and sexy wife. His mantra becomes: "If Allah doesn't kill me, this neighborhood will." Meanwhile, the elder Ramadhir Singh, now Governor of the entire Dhanbad district, has killed so many Khans that he's lost track of all their names, and his children, the equally unlikely JP, are making their moves. The dangerous combination of constant breeding and constant violence fuels the never ending cycle of bloodshed on the streets. The film offers a cathartic climax that brings much of the themes and character building to a satisfying closure as yet another generation is on its way. It immortalizes another Faizal bon mot, "There are two things you cannot trust in this business, the fear in your heart, and partnerships."  Look out, Walter White!
Some of the big marketplace and street-chase scenes in Gangs of Wasseypur were filmed in real environments, no permits, and the actors performing their roles for hidden cameras, saving the cost of extras too. This level of commitment, yielding flawless results, is a miracle of indie filmmaking.