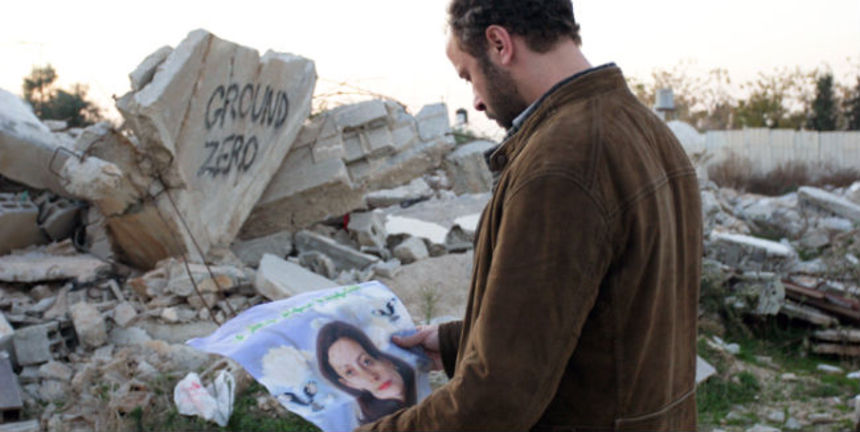 The complicated situation in Israel, with its uneasy peace and frequent bursts of non-peace between Jews and Arabs, has given rise to numerous compelling stories, and will no doubt continue to do so for as long as there is conflict in that region (i.e., forever). The Attack, a sobering drama by Lebanese director Ziad Doueiri (Lila Says), explores the unique personal pain of an Arab doctor living in Tel Aviv, and emerges as one of the more piercing pieces of fiction on this subject.

The film begins with our doctor, Amin Jaafari (Ali Suliman), a well-respected surgeon at a Tel Aviv hospital, receiving a prestigious medical award -- the first Arab to do so, he notes in his gracious acceptance speech. His admiring audience of fellow doctors, nearly all of them Jewish, chuckles appreciatively when he says that "every Jew is a bit of an Arab, and every Arab must admit he has some Jew in him." In other words, we're all more alike than we are different.

Not everyone is at peace with that concept, however. The next day, a suicide bomber kills 17 people and wounds several others, the victims rushed to the hospital where Amin works. This is devastating, but it gets worse for Amin: investigators believe his wife, Sihem (Reymonde Amsellem), was the bomber. If she was, this is absolutely the first inkling Amin ever had of her extremist sympathies.

As he tries to understand what has happened, Amin is forced to rethink what he knew (or thought he knew) about his wife and his own relatives, who live outside Tel Aviv in the Palestinian territories. He is an Arab, though not a practicing Muslim, and while he's become assimilated into Tel Aviv, he's forgotten that many of his Arab kindred are hostile toward Israel. Some would consider Sihem an honorable martyr.

Ali Suliman, star of the similarly themed (and Oscar-nominated) Paradise Now, brings somber intensity to the role of Amin, taking the character through most of the stages of grief before our eyes. As director, Doueiri (who wrote the screenplay with Joelle Touma, adapted from Yasmina Khadra's novel L'attentat) prods us to consider the complexities of Amin's situation: Arab, yet living among Jews; sickened by the idea of mass murder, yet understanding of the ideology behind it. The Attack puts a human face on what is for many of us an abstract, faraway problem, bringing it home to us in terms we can all relate to.

The Attack screened at the Telluride Film Festival and will play at the upcoming Toronto International Film Festival. Cohen Media Group and Focus World will team to release the film theatrically in North American in 2013.

More about The Attack