Review: FOR A GOOD TIME, CALL... Pushes All the Right Buttons 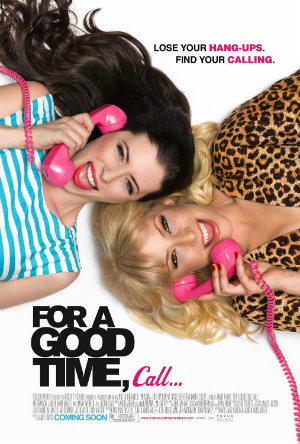 As difficult as the ins-and-outs of solid female friendships may be to navigate in real life, they prove even more difficult in the movies.

Or so Hollywood would have us all think, given the dearth of attention it has historically paid to ladycentric films - especially the buddy comedy, which For a Good Time, Call... ostensibly is. Following in the wake of last year's monster-smash Bridesmaids and the continued success of tubular programming from the likes of Tina Fey and Lena Dunham, stiletto-heeled change may finally be afoot. We seem to be experiencing a similar zeitgeist to Lilith Fair in the 90s, except funnier.

When sweet but boring Lauren (Lauren Miller) breaks up with her longtime beau, she turns to her gay bestie Jesse (Justin Long) for moral support and help finding a new place to live. Turns out Jesse's other best girlfriend, sweet but sassy Katie (Ari Graynor), needs a roommate, lest she lose the fantastic apartment she inherited from her grandmother. For the sake of their finances, the two former college "frenemies" (and Nice Jewish Girls) put aside their differences and decide to give co-habitation a go. When Lauren learns about Katie's lucrative but wholly mismanaged part-time gig as a phone-sex operator, she decides to come aboard as a business partner. Hilarity ensues.

Though For a Good Time, Call...'s  initial set-up was a bit too twee and convenient for my liking, it was also swift enough to be mostly forgiven and forgotten about twenty minutes into the film, which smoothly transitioned into something far more charming than I would have imagined given the premise. Both Graynor and Miller offer endearing, heartfelt, and authentically funny performances that essentially carry the film. Their bubbly onscreen chemistry is familiar and inclusive, and by the final scene I felt like I was laughing over inside jokes amongst my own friends. 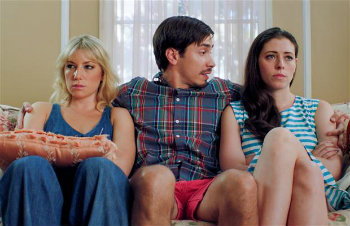 It's no surprise that a film about female friendship and phone sex was co-written by real-life friends Miller and Katie Ann Naylon, the latter of whom drew from her own prior experience as a phone-sex operator-cum-student while at college. The film does a good job at being raunchy without being gross; lots of  clever innuendo at (word) play as opposed to any shocking visual gimmickry. Hilarious one-handed cameos from Kevin Smith, Seth Rogen (Miller's real-life husband) and Ken Marino are both awkward and weirdly intimate (not unlike phone sex itself).

Ultimately, (though it's not a competition) it is Graynor who manages to emerge here from the best friend shadow of Rhoda-like purgatory (Nick and Norah's Infinite Playlist, Celeste and Jesse Forever), deserving to be recognized for the leading lady force that she so clearly is. She gets full points for dancing uninhibitedly whilst wearing  full-body Spanx (a feat of celluloid bravery that Shia LaBeouf could only ever hope to aspire to) and the subtle yet utterly unmistakable look of self-satisfaction (the ultimate turn-on) emoted at the exact moment Katie hears the wicked orgasm she coaxed out of her favorite client. Certainly, Graynor's character is the more outlandish and overtly funny of the two; she plays Katie with a certain bawdy Jew ne sais quoi that would make Sophie Tucker proud. Miller is the wind beneath her wings, the Felix to her Oscar.

Particularly refreshing was how the film managed to steer clear of certain tropes: Mean-spirited cattiness, girl-on-girl competitiveness and, well... weddings.

More about For A Good Time, Call