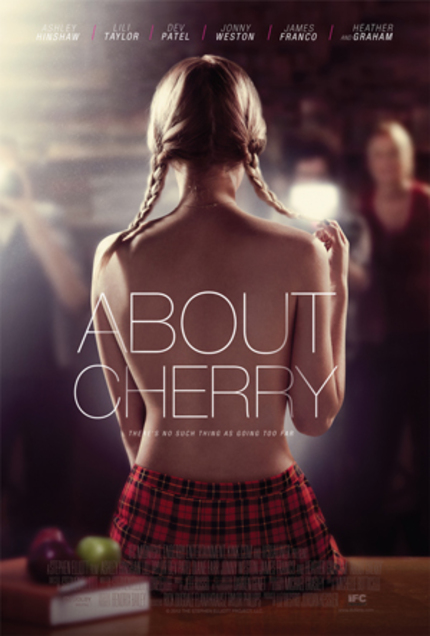 It gives me no great pleasure to write this review.

About Cherry is the directorial debut of Stephen Elliot, author of the novel Happy Baby and the superb memoir, The Adderall Diaries. How I didn't realize this until after I had almost finished writing this review is beyond me. I was checking something against the press materials and there it was, staring me in the face. Stephen Elliot, the director of About Cherry... is also the author of seven books.

Fuck. I'm a big fan of Stephen's, and this is a pretty negative review. I am also the editor of a literary website, which means we run in some of the same internet circles. Would I have toned things down had I realized sooner he was the director? Now that I think about it, I might have foregone writing a review altogether. But since I had already committed to it, and had in fact already written it, I figured that for integrity's sake, there was no turning back.

About Cherry is about Cherry, Angelina soon to be nee, and her small circle of friends and family, tangentially. She's played competently by Ashley Hinshaw, a pretty actress I've never heard of before, with support from veteran actors Heather Graham, Lili Taylor, and James "Alien" Franco.

The impact is also lessened by the fact that Franco has about 10 minutes of actual screen time. He washes over us in a charismatic wave, wins Cherry's trust, and immediately offers her a line of coke. This should be a harbinger of the descent not taken, or at least ring some warning bells that Prince Charming isn't all he seems, but no, this ominous moment is glossed over and -- cue the emotionally manipulative music -- we are suddenly witness to a young couple falling in love. Pretty much next time we see the boyfriend, he's calling her a whore.

Then there's the rest of the supporting characters. They're all window dressing, outliers, there to flesh out an idea into a film. Cherry's mother? No resolution in that relationship. She just shows up, drunkenly guilts her daughter into giving her money, and then leaves. Cherry's best friend who has a crush on her? He is such a milquetoast, I wanted to slap his face like Cher and yell, "Snap out of it!" Seriously, just pathetic. And where does Cherry get off getting mad about him getting off to her? You KNOW dude is obsessed with you, yet you still sleep next to him in your underwear and let him get his cuddle on. He's right. You really do treat him like a pet.

And what about Cherry's poor younger sister? Remember that angry stepfather who might maybe have untoward ideas, just maybe? Remember that scene where he hovers over the two of them while they are sleeping? Selfishly abandoning that little girl to an alcoholic mother is one thing, but abandoning her to an angry stepfather who might maybe have untoward ideas about young girls? That's fucked. Which is fine, if it adds to Cherry's character arc, but it doesn't, because again, she doesn't really have one. There's no resolution to that aspect of the story, either. Way to leave us hanging on the sister molesting.

There's really no resolution to anything. Like I said, Cherry doesn't have much of a character arc. She starts in one place and ends in another, traveling a straight line between them, emotionally. Why does she end up where she ends up? Is it out of necessity? Convenience? Is it because of love? The ending is too flat to give us any real indication.

So what is About Cherry actually about, then? What's the point? It isn't a cautionary tale about the porn industry. It isn't about a young woman's descent. It isn't about how she triumphs against adversity and rescues her sister from a horrible life of maybe-just-maybe sexual abuse. And it certainly has nothing complex to say about feminism, pornography, and the dichotomy of sex work. It's a non-narrative. It's inert. Which is a shame, because Elliot is a really good storyteller. I'm not saying the film is an unwatchable mess. I'm not even saying Elliot has no business behind the camera. I just wish he had taken some real risks with the material, risks I know he's capable of, because he's taken them in his writing.

About Cherry is now available on VOD & Digital Platforms. It opens in theaters September 21.

Stephen Elliott? Isn't that the same bullshitter who claims to have "grown up in group homes" and was homeless? Hopefully this will be his last movie. I saw it in Berlin and it sucked.