Fantastic Fest 2012 Review: FUCK UP Doesn't Fuck It Up 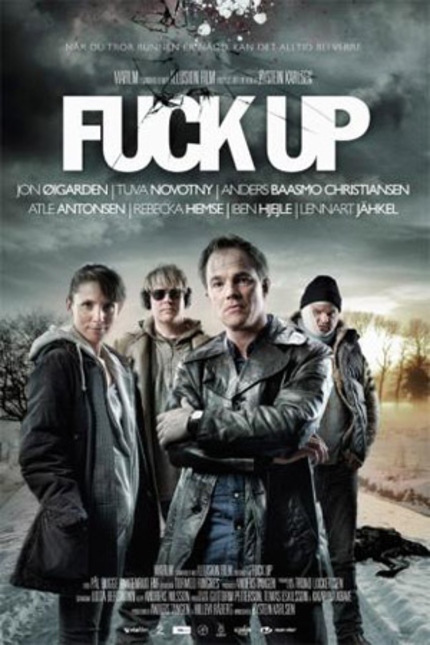 The Norwegians are leaving, and this time you can't blame Audrey Horne. Another Fantastic Fest has come and gone, and our Scandinavian brethren have returned to the land of ice and snow of their own volition, not because a young, pretty girl told them her friend was murdered.

They were well represented this year, with a number of interesting film, television, and video game projects. There was the TV series Hellfjord, the unsettling short film Videoboy, and something called Vikings on Trampolines, which sounds pretty awesome. There was also the understated possession documentary, The Exorcist in the 21st Century. But by far the most impressive Nordic entry into this year's festival was the aptly titled Fuck Up, directed by Oystein Karlsen, the man behind the hit Norwegian sitcom, DAG.

Like so many stories, it all starts with a moose. A poor, unsuspecting moose. And a car crash. And a trunk full of cocaine. Three things that are relatively common in Norway, individually, but as a group? I mean, sometimes you'll get a car-on-moose collision, or maybe even a moose off his tits on cocaine if it's a special occasion, but hardly ever all three elements at once. But I digress.

The driver goes to the hospital and the cops confiscate the drugs, and of course there are repercussions via shady business types who want their money, so things quickly go from bad to finger-chopping worse. The majority of the shit falls on the shoulder's of Jack, best friend of the unfortunate driver and the real fuck up of the film (hard to believe, right?) He and his group of childhood friends (driver included) set out to fix the situation before things get really nasty and somebody has to die.

Fuck Up has a lot in common with another film I saw at the festival this year: Crave. Both are amalgamations of multiple genres and both feature unlikeable-yet-sympathetic main characters. But that's where the similarities end. Because while I don't feel Crave was successful in keeping an even tone despite the disparate genres, Fuck Up fucking nails it. It's like taking a picture at the Four Corners Monument: the point where Arizona, Colorado, Utah, and New Mexico meet. Each of your limbs is in a different state, but everything looks and feels the same. Fuck Up might be part crime story, part drama, part black comedy, and part coming of age tale; but it all co-exists in a perfect cinematic Feng Shui. It is not a pastiche; it is a uniform whole.

And whereas the lead in Crave isn't quite up to the task of pulling off the likable/loathable dichotomy, Jon Oigarden, who plays Jack in Fuck Up, does so with little effort. The supporting cast, too, is pitch perfect. You actually feel like this group of actors are lifelong friends, just like the characters they portray. It helps that many of them, as well as the entire film crew, worked together on DAG. There is a natural assurance onscreen that can't be faked.

But wait, there's more. Unlike most films involving drugs and criminal activity, Fuck Up does offer an alternative to the lifestyle: chicken wings. That's right, chicken wings. Food prices in neighboring Sweden are much lower due to poverty and penalties for food smuggling are much less severe than those for drugs. Plus, chicken wings are delicious. If you are a Norwegian criminal and would like to know more, you'll have to check out the film. If you're not a Norwegian criminal and you weren't lucky enough to catch this at Fantastic Fest, keep your eyes peeled.

More about Fuck Up