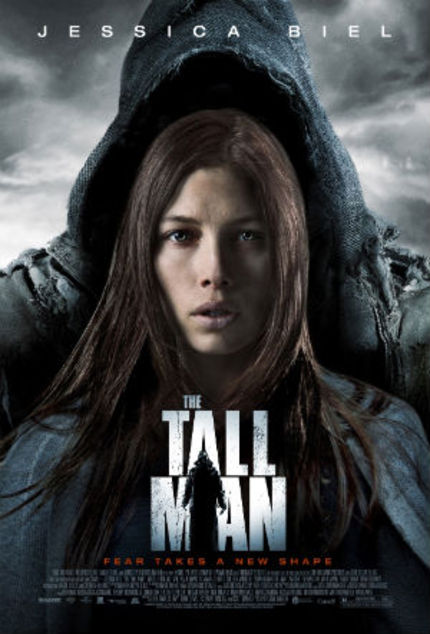 (The Tall Man opens today in limited theatrical release in the U.S. Here's our review from this year's SXSW.)

Pascal Laugier's first film since Martyrs is seriously underwhelming. Laugier, the director, can still deliver cool, efficient thrills, as evidenced in an early, extended sequence in which Jessica Biel gives ferocious chase to a mysterious stranger who has kidnapped her child.

But Laugier, the writer, again has "something to say," and that could be a good thing. It's unfortunate, however, that the message, when delivered, is nowhere near as provocative or multi-dimensional (or pretentious or divisive) as Martyrs. Even leaving Laugier's previous effort out of the equation, however, The Tall Man adds up to an ambitious thriller -- with a very good performance by Biel -- that falls short of its goals.

Biel stars as Julia Denning, a nurse who has been operating a free clinic in a small town since the death of her husband, a beloved doctor. The dying town of Cold Rock is set admidst the beautiful forests of Washington State in the Northwestern United States, where a persistent mist flows out around tall trees, and low-lying cloud banks make for consistently gloomy days.

The town itself is under a dark cloud because children keep disappearing. With no answers in sight, and fear and speculation rampant, a legend has sprung up: The Tall Man, a shadowy figure occasionally spotted by parents dashing into the woods, is held responsible.

The legend becomes real when Julia's young son is taken from her home by a tall figure dressed in black.

The Tall Man begins with statistics about missing children, and then kicks right into Julia receiving medical assistance after a brutal incident of some kind. From there, it flashes back for the set-up, as described above, and then dives into (supposedly) deeper waters from there.

Without divulging any more specifics, the film is structured, like most commercially-oriented efforts, so that it will pay off in the third act. And the weak pay-off is the culmination of an increasingly docile series of sequences that lead exactly nowhere.

Admittedly, expectations may have played a stronger role than usual in my disappointed reaction. In my review for Martyrs, I wrote: "Before it crashes and burns in an extended heap of steaming, stinking pretentious crap, Martyrs amply demonstrates that Pascal Laugier is a very talented director. As a writer, not so much."

And so it is with The Tall Man. Laugier is clearly a filmmaker who knows how to create striking images and assemble action sequences with flair. This time, however, without incredibly bloody violence to distract, his limitations as a writer are even more apparent. What's needed is something incendiary, something that will provoke a deep reaction, either positive or negative. Instead, a pallid bromide is offered up, and it's just not enough.