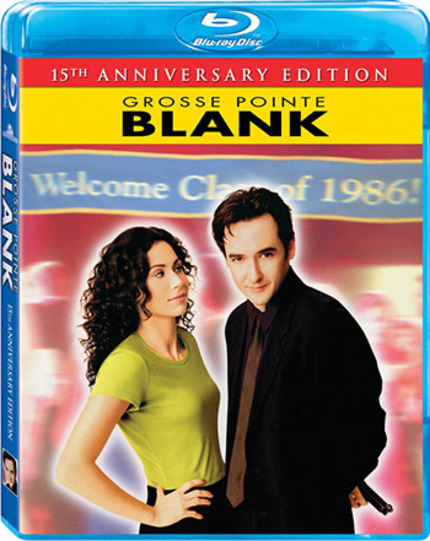 [Correction: In the original post, I mistakenly added that High Fidelity was turning 15 this year. It's in fact celebrating 12 years since its debut.]

It's some kind of curious emotion-response loop to feel nostalgia for two movies created for and about nostalgia. That both movies star John Cusack and were made in the same year again doubles that odd sensation. But what can you do? He made those things, we watched them, and now it's time to reconsider them as parent company Disney brings them to Blu-ray with the minimum of fanfare, save for a sticker proclaiming that yes, it has been 15 years since Grosse Pointe Blank was in theaters (and 12 for High Fidelity).

First up we have Grosse Pointe Blank, whose title concerns the Michigan hometown of distressed hitman Martin Blank (Cusack). A couple of jobs gone wrong and he's starting to worry that he's lost his taste for his chosen vocation. Some constant pressure from high-strung rival Grocer (Dan Ackroyd) to join a union for paid assassins and one possibly-maybe last job sends him back to his hometown for the weekend of his ten year high school reunion, where he must deal with, among other things, his high school sweetheart Debi (Minnie Driver) who's held a torch for him since he abruptly disappeared the night of the prom.

Grosse Pointe Blank is a weird stew of elements, arriving at the back of the crowded field of movies about trained killers, neurotic crooks, and erudite assassins at the end of the 90's (you can count among those odd ducks like Montana and Things to Do In Denver When You're Dead, although those could be put under the sub-categories "ensemble," "wildly talented casts who needed the work"). Plus, it rode the 80's nostalgia wave at the tail end of that decade, its soundtrack packed to the brim with songs from the Reagan era.

Cusack's blank is all of the actor's neurotic tics matured but not grown up, if you know what I mean. You get the feeling Martin is still the put-upon wise-ass he was before he pulled up stakes, joined the Army, and spent the next decade killing people. For most of the movie's running time, it's actually a pleasure to see Martin become a real-live person instead of a black tie on black shirt killer. I would actually say once Grosse Pointe Blank gets its setup out of the way and settles down in the titular town, bringing Martin face-to-face with Debi, it's a wonderful movie (for let's say, 60-75% of it's 107 minute running time).

I love Debi's first reactions to Martin after seeing him for the first time in a decade, testing and teasing him but obviously attracted. She's retreated back to her hometown after a failed marriage and this stranger is a big "what if" in her life. And the class reunion segment is both funny and harrowing, a reminder that some of us were actually better off avoiding our own (let's let the people in the past stay the people in the past).

But around the tail end of the kickboxing fight in the hallway (with Benny "The Jet" Urquidez, no less!), Gross Pointe starts to fall apart, a victim of its winking excess. It turns into a cartoon where before it had gradually worked itself into a movie with real people.

Director George Armitage worked with American International back in the 70's with the Corman camp, cranking out the script for Night Call Nurses *which was all at once a sex comedy, a social issues picture, and a stalker-killer piece), and later wrote and directed the Alec Baldwin-starring crime-comedy stew Miami Blues. During its last 20 minutes, Grosse Pointe Blank starts to feel like the mishmash of Night Call Nurses.

Wait, let me back up a little: it keeps things real for a little past that fight when Debi visits Martin in his hotel room, demanding to know what happened in the hallway, and how he would come to kill a man with a pen. One of my favorite lines from Tom Jankiewicz's script comes from this bit, where she asks him why he never learned that it was wrong to kill people. I love the direction this scene was heading, because as a character, Martin hadn't earned a happy ending, especially the one this movie drops in his lap.

Whereas the driving force in Grosse Pointe Blank was Martin's uneasiness with his own past, Stephen Frears' High Fidelity is about a man attempting to figure out where his went wrong. Cusack's record store owner Rob has just ended yet another in a string of relationships with wonderful women, and he's decided to revisit his exes to understand what it was about him or them that caused things to go off the rails.

Where nostalgia was just kind of the dressing on Grosse Pointe, in High Fidelity it informs everything about Rob, who at one point decides to catalog his classic record collection autobiographically (also: hey records, remember those?). Rob is such a fascinating, horrible mess of a man, smart, insightful, petty and bitter all at once. He thinks he understands himself, but he's really just built up this complicated image of the smart, sensitive, and complex thinker, when really, he just has to come to terms with the fact that he's an asshole and would keep lovely ladies if he were less of one.

I'd almost forgotten that Jack Black is in this, and he might wear on you a bit in the short term doing his loudmouthed wild man thing he's cultivated over the years, but you'll just have to forgive the movie for unleashing that particular act on the world because it's full of so many more interesting observations about the modern asshole, if you will (a category in which you might, at some times in the past have included your humble writer). If you recognize some of yourself in Rob, don't panic, and maybe think about what you're doing with your life and who you love and how you love. You're maybe not as smart as you think, but you deserve to love and be loved.

Grosse Pointe includes its theatrical trailer while High Fidelity blesses us with conversations with the film's director and Cusack along with a handful of deleted scenes.

Both Grosse Pointe Blank and High Fidelity are now available on Blu-ray.