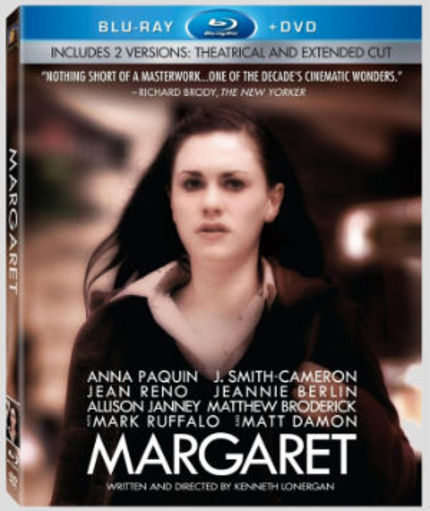 What the hell is this? A 2.5-hour capital-D "DRAMA" movie about a teenage girl who says and does selfish things and causes all sorts of trouble for all the people around her? Why would I care about that? We already know that teenagers are egocentric alien creatures who infuriate the universe, so why should you want to sit down for a long journey with yet another one? I'm (mostly) joking about teenagers, of course, but there's no getting around that Kenneth Lonergan's Margaret presents one of the most fascinating cinematic adolescents in quite some time.

Little more than an extensive character study on the surface, the frequent brilliance of Margaret lies in the subtle little narrative tendrils it slowly extends. Not to spoil the film's rather effective inciting moment, but it occurs as young Lisa Cohen, a plainly intelligent, effortlessly pretty, and blissfully ignorant teenager stumbles across a horrific accident victim. One chance, if harrowing, brush with someone's sudden demise has changed Lisa forever, but how? For better or for worse? And how will our formative young lady affect the lives of other people, now that she has experienced something brutal, invasive, and decidedly "adult"? Simple on the surface, perhaps, but there's a big difference between a well-wrought character study and an intimate exploration of universal themes like maturity, compassion, decency, and responsibility.

For a movie that can be summed up in one sentence, Margaret (its title comes from an influential poem read by Lisa's English teacher) certainly does work on a variety of challenging levels. As a simple coming-of-age story, Margaret is undeniably effective, if perhaps a bit too long for its own good. But once you realize that you're settling in for a 150-minute experience (which I chose; the extended version is 186 minutes), a viewer is able to extrapolate all sorts of interesting themes from this odd yet generally captivating movie. I saw a story about A) how what happens to "me" actually happens to everyone I know, in a way; B) the slow and painful ways in which we learn that our actions, even small ones, can often have unforeseen consequences; C) how I am the center of my own universe, and you are yours -- and how this idea can keep even the closest of people at a distance.

You will of course yank your own ideas out of Margaret, which is why it's the best sort of "serious drama movie." It can be lots of things to many different viewers. For those who are just plain old movie geeks, you're in for a fine array of ingredients. Not only is Anna Paquin at her very best here (she runs through virtually every emotion imaginable; it's an amazing performance), but she's got strong and amiable support from the likes of Matthew Broderick, Matt Damon, Mark Ruffalo, Jean Reno, Kieran Culkin, and (in a few quick but important scenes) Kenneth Lonergan himself. And while Paquin has no trouble shouldering most of the film's heavy lifting, no review of this film could be complete without a special mention for actress J. Smith-Cameron. Best known for her stage work -- although she's done movies and TV as well -- this actress elevates every scene she appears in. Were Margaret a bit more conventional, or had it received a more traditional theatrical release, both Paquin and Smith-Cameron would be looking at guaranteed Oscar nominations. As it stands, they're simply two great performances in a really good film. Unfair perhaps, but excellent all the same.

Bolstered by moody New York cinematography, a fine score by Nico Muhly, and a narrative structure that feels episodic but never modular or random, Margaret is a strange, challenging, and unique little character piece. It's an admirable film just for its ambiguous and intelligent approach to vague but familiar ideas, but it's also impressive because, frankly, directors don't make many movies like Margaret these days.

Margaret is now available as a combo package from Fox Searchlight, with the extended cut on Region 1 DVD and the theatrical version on Region A Blu-ray. Both versions are also available separately via various VOD platforms in the U.S.